You are here: Home / Communications / Leadership Lessons in the Blink of an Eye

When you think of leaders who have made a difference who comes to mind? 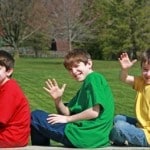 In our Total Leadership Connections program we spend time discussing this and over the years several themes have emerged. Many are the same for all leadership programs around the world. Jesus, Buddha, Moses, Mohammed, Gandhi, Mandela, MLK, JFK, FDR are on most lists.

When it gets more personal folks mention a parent, sibling, teacher, business mentor. Last week I was in Manhattan and took the subway to speed my trip. Some noisy kids took me back to a story about my mother I would like to share; it’s leadership in action.

Rebecca, or Reba (she thought that was more modern) stood 5’1″ tall; a wisp of a woman with a feisty no nonsense manner. I was to pick her up from her suburban apartment and drive her to a doctor in center city Philadelphia. At 78 she had been in good health, except….. That was the reason for the appointment.

I had an emergency meeting and my mother decided to take the circuitous bus ride into town. That’s the back story. The leadership story is about to unfold.

A group of six bright-eyes boys, around 14 years of age or so got on the bus with their boom box blaring. They were taking over the bus, horsing around, yelling; nothing bad, just all over the place.

As my mother reported the story later, she looked around and the “elderly folk looked uncomfortable, intimidated“. She continued her report. She watched for a while and had a hunch who the leader was. And in her words “I motioned to him to come to the front where I was sitting. It took a few moments and he came over saying “Yeh lady what’d ya want?”

I decided to see how he would take some deeper talk, not just an admonishment. So I told him I thought he had leadership skills, I had watched and that was my estimate. I also said that leadership is both a privilege and a responsibility. He sat down next to me and said “Yeh, so?” Not in a nasty manner, more curious. I asked him to look at the older folks on the bus. They were frightened and afraid you kids would get out of hand. I suggested he tell his friends to quiet down and save all that energy for the park.

He went back and had a pow-wow with the other boys and they did sit quietly till it was their stop. Then she said, to me “Wait the best it yet to come. When they got off the bus they yelled ‘bye lady’ and the leader, came to the front, shook my hand and said “Hey lady, do you ride this bus often? I hope I see you again.” And with that he jumped down the steps and continued to wave and when we were just about out of sight he blew me a kiss and one last wave. Best kiss from a young man I’d had in years!”