You are here: Home / Businesswomen Bloggers / That Grand Lady at the Harbor 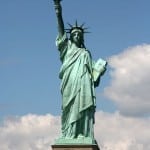 Ladies, let’s continue to celebrate our freedom by underlining the importance of The Statue of Liberty and the role of women in our society. In her poem about the statue, Emma Lazarus called it “The New Colossus”. The beginning of the poem refers to the Colossus of Rhodes which was one of the seven wonders of the ancient world. It was a statue of the Greek God Helios, who, in his chariot would take the sun around the world. Thus, he became known as the bearer of light.

Lazarus gives a female spin to being a bearer of light when she has the mother of exiles be a welcoming, rather than conquering, symbol. Liberty welcomes all castaways and homeless dreaming of freedom to come to this land to participate, create, and continue to dream big dreams.

Red, White and Blue… and Many Other Colors by Marlo Thomas, contributor, Huffington Post

Every year on the Fourth of July, my husband and I invite a few friends to join us as we take a boat out onto the choppy waters of the Hudson, and drop anchor near the foot of the Statue of Liberty to watch our city’s fireworks. Phil pilots this annual journey, as well as plays DJ, with a large supply of distinctly American music piped over the boat’s sound system — from Gershwin and Ray Charles to Sousa and the national anthem.

But it’s when we arrive at the Statue itself that all of us momentarily take a breath. It’s impossible to be so close to the lady of the harbor without realizing that she was the very first vision of America that millions of immigrants would behold — including my grandparents. They had fled poverty and hopelessness in Lebanon, and there they stood on the deck of a steamer and gazed in wonder — their life’s belongings in tattered bags at their feet.