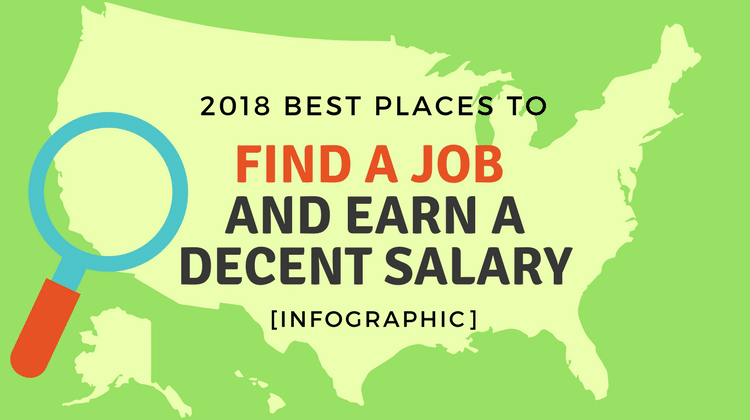 The 2018 ranking of the best places to find a job in the United States has been released by WalletHub. This year’s list includes rankings for 182 cities across the country (including the 150 most populated U.S. cities and at least two of the most populated cities in each state) with rankings in categories like the job opportunities, employment growth, monthly average starting salary,  unemployment rate, median annual income, average work and commute time, and housing affordability.

WalletHub evaluated 26 metrics related to job markets and socio-economics to create its 2018 list. Keep in mind, the results are based on data related to each city only – not surrounding cities or areas.

Overall Best Places to Find a Job in 2018

Based on all 26 metrics, WalletHub gave each city a score, which was used to create the overall ranking of the best place to find a job in the U.S. in 2018 as well as in its rankings of cities in the more specific categories mentioned earlier in this article. Overall, here are the 10 best cities to find a job in 2018:

Overall Worst Places to Find a Job in 2018

Cities with the Most and Fewest Job Opportunties in 2018

On the flip side, the fewest job opportunities are in Bridgeport, CT followed by Stockton, CA; Bakersfield, CA; Detroit, MA; and Fresno, CA.

Cities with the Highest and Lowest Starting Salaries

That means these rankings are significant when it comes to comparing cities. For example, the total score for the top city overall to find a job in 2018 is 67.66 (Chandler, AZ) while the total score for the lowest ranking city is 37.49. In other words, the highest rank city’s score is nearly double (44.59% higher) than the lowest rank city’s score.

How does your city rank on the list of the best cities to find a job in 2018? Are you surprised by the ranking? Leave a comment and share your thoughts.

You can see more data from the rankings in the infographic from WalletHub below.