You are here: Home / Reader Submission / Women in the Construction Industry: The Low Down #NotJustForBoys 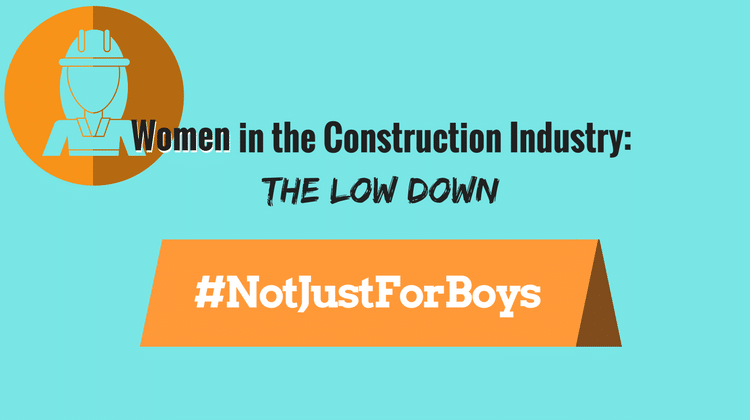 Presently, less than 10% of workers in the UK construction industry are female, but only 1% of those workers actually work on-site and carry out manual work. Construction is one of the most gender-segregated professions in the world. While women have made great advancements in the workplace over the past decade, getting women to work in construction is difficult. The industry is failing to attract and retain female workers for a number of reasons.

Due to its ‘macho image’ and gender stereotypes, sexism is unfortunately prevalent in the industry, and this is showing no signs of changing anytime soon. There’s a stigma of women being perceived as weak while carrying out manual labor jobs with male workers cracking jokes about ‘breaking a nail’ and ‘makeup getting smudged’.

Women aren’t taken as seriously as men in this industry, and this ‘unchallenged’ sexism even extends as far as salary with female construction workers being paid 12% less on average than men. This gender pay gap, interestingly, is wider than in other industries. The construction sector is no exception to the ‘glass-ceiling’ effect either with many females reporting a lack of progression opportunities when compared to their male counterparts.

They have to constantly prove themselves as good enough to work in construction with their decisions being challenged by men who often claim to understand the business better than they do. So it’s not surprising that women are deterred from joining construction and that it’s the only industry in the U.K. in which female employees make up less than 10% of the workforce.

Clearly, more needs to be done, not only to improve working in construction for women, but also for a greater push in schools, colleges, and universities for women to join the sector. Industry leaders are looking to change this by implementing female role models to show women that there is a place for them in construction.

Despite these facts, the rate at which women are entering the male-dominated world of construction is at an all-time high, and it is estimated that by 2020, a quarter of workers in the U.K. construction industry will be women. Women are expected to fill one in four construction jobs over the next three years, and the number of women carrying out traditionally female jobs within construction is expected to drop. More females than ever are picking up careers working as engineers, architects, and surveyors over administrative and secretarial roles. A 6% increase in salary has also been noticed for women, and this is expected to increase further.

No doubt that this will play an important part in counteracting sexism and gender stereotypes for women in the construction industry.

Newcastle born and bred, Laura Driver is a post-graduate now living in Hampshire who writes for EasyBuild. Her bike is her best friend and she can cook amazing gnocchi and chorizo pasta bakes.