You are here: Home / Women On Business Partners / 4 Keys to Enhance Female Leadership in Your Business 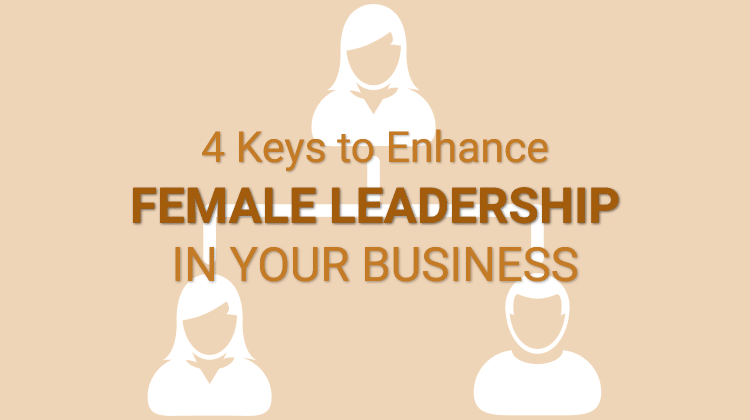 It should come as a surprise to no one that about 50% of the population is women. What is surprising is just how little that fact informs the most important decisions we make: decisions such as whom to hire and fast track into leadership roles within the corporate structure.

But as anybody who has studied discrimination for more than a microsecond knows, it doesn’t begin in the interview process. Gender discrimination stretches from cradle to boardroom.

Almost from the moment of birth, females are treated differently. Before they are capable of understanding words, they are told how pretty they look and indirectly, how important it is to stay that way.

There are no toy trucks in pink boxes, and those expectations continue through grade school and college. Social expectations and pressures lead teachers, parents, and academic counselors to steer boys and girls in different directions.

Women graduate more frequently and with higher scores, but they do so with degrees targeted at what is traditionally thought of as women’s work. Male domination in the corporate environment begins long before job openings are even posted.

Against this backdrop, it is difficult to see how things can ever get better, but in many places, they are. Here are the keys to mirroring that progress in your organization:

However, it has been well established that just knowing the name on an application prior to making a decision can be enough to steer that decision in one direction or another. People with obvious African American or female names tend to get pushed to the bottom of the stack almost unconsciously.

This unintentional bias runs throughout the entire operation from the decision about bonuses and promotions, to work assignments and employee evaluations. Some of this type of bias can be mitigated with the right software.

With the right talent management systems, you can do a better job of tracking your in-office and mobile talent, measuring the efficiency of both product listings and crew listings, and identifying challenges before they become problems. You can better manage your human capital from application to promotion with more precision and less gut feeling where unintended bias tends to live.

Rather than perpetuating the cycle of blame, become a mentor and get the most out of your human resources regardless of gender. There are tried and true steps to becoming an effective mentor.

Beyond the specific steps, being a mentor is about taking personal responsibility for the success of the people in your organization. Glass ceilings have to be broken from the other side. Mentor programs are a great way to do that.

When Apple started volunteering diversity reports, the numbers looked dismal. And while Apple has made much progress on its overall diversity numbers, it is still lacking at the executive level.

What they should be praised for is their willingness to be transparent and accountable to the world about things like gender diversity. If you are ready to make some real progress in that area, there is no better motivator than naked transparency.

They will not dig deeper to see what is really going on behind those visuals. There may be a perfectly reasonable explanation that no one will hear. We live in a world that has been plagued by discrimination for ages, and we are getting a little fatigued by it.

No one cares about your explanations or excuses. If your corporation has an obvious disproportion in the area of gender, you need to care and do something about it.

A number of companies have used these four keys to unlock gender balance in leadership positions. Make sure your company is one of them.