You are here: Home / Women On Business Partners / Circling Back on Corporate Speak: The History and Impact of Business Jargon 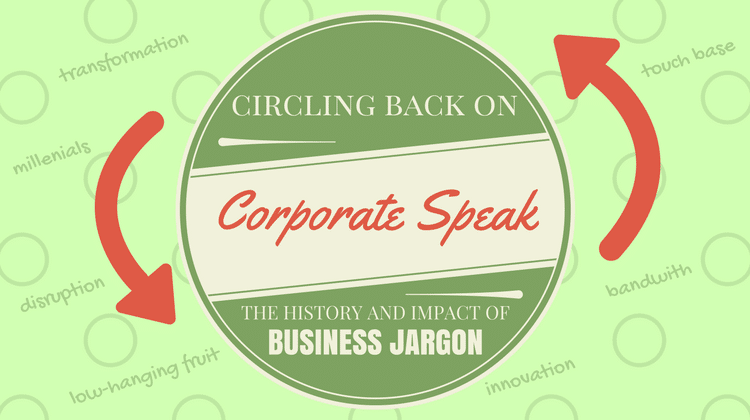 “Transformation,” “disruption” and “millennials” topped a 2015 survey of business jargon terms workers are sick of hearing. Unfortunately, these are just the latest entries in corporate speak, joining “low-hanging fruit,” “touch base,” “bandwidth” and “innovation.” Business jargon, or specialized language used in the industry, has a long history and is universally disliked.

Business jargon does more than annoy workers. It obstructs communication and undermines the productivity, turnover and culture at businesses.

The History of Business Jargon

Prior to the Great Depression, businesses in the United States were primarily concerned with efficiency, and corporate culture followed. “The words used to talk about workers in books and boardrooms were accordingly mechanistic, emphasizing accuracy, precision, incentives, and maximized production,” according to The Atlantic.

A shift occurred in the 1930s. Researchers started focusing on human relations. Managers who didn’t understand the psychology of workers — who treated them as machines — were ineffective supervisors, resulting in increased tensions between labor and management. The timing of the Great Depression exacerbated these ideas, and this period was linked to companies not being able to meet workers’ psychological and social needs.

In the aftermath of World War II, American companies changed. Most large organizations became diversified conglomerates as a result of mergers and acquisitions that took place in the 1950s and ’60s. As a result, it was more difficult for workers to feel connected to their companies. Also, during this time, organizational science wasn’t relegated to researchers. Companies began to take an interest in how to help employees become more productive and connected.

Businesses asked how they could get workers to feel differently about their jobs. The Atlantic reports that it was also about money: “As a manager, how can I maximize profits by creating a certain emotional atmosphere at my company?”

As a result of these questions and increased competition, business jargon emerged. “Jargon is the verbal sleight of hand that makes the old hat seem newly fashionable; it gives an air of novelty and specious profundity to ideas that, if stated directly, would seem superficial, stale, frivolous, or false,” writes poet and critic David Lehman in his 1991 book, Signs of the Times. “The line between serious and spurious scholarship is an easy one to blur, with jargon on your side.”

It didn’t take long for researchers and business leaders to develop theories that led to business jargon.

By the turn of the 21st century, industries had their own versions of corporate speak. For instance, finance had terms like “leverage” and “standard deviations.” Marketing brought “thought leader” and “run it up the flagpole.” Technology developed “bandwidth” and “disrupt.” More recent developments mix emotion and jargon:

The Impact of Business Jargon

In a study of internal communication for Italian companies during a crisis, Corporate Communications found misalignments between what companies meant to communicate and what employees perceived. Some employees in the study complained about the clarity of messages and disliked hierarchical communication, or communication that differs based on corporate levels and structures. Managers whose messages contained limited or no jargon witnessed positive attitudes and trust among fellow employees and their employers.

A review of literature about business jargon in the American Journal of Industrial and Business Management found that it impedes a company’s daily communication and success. Business jargon tends to cause misunderstandings that affect individual and organizational productivity as well as profit margin. An organization’s resources can also be wasted. Additionally, ineffective communication and business jargon can lead to employees feeling like they are looked down upon by the company and their manager. As a result, employees may feel irritated and left out, leaving them demoralized and contributing to high employee turnover.

In some instances, businesses may use jargon for ulterior motives, worsening the effect it has on employees. “Managers might want to sound smarter and impress their employees but this type of language does not facilitate communication, instead it hinders it,” says the American Journal of Industrial and Business Management. “In some scenarios, managers may even intentionally hinder communication in the organization by using many jargons to avoid hard questions or hide failure from the employees.”

The Washington Post adds that business jargon can veil what speakers really mean. For instance, “cut some capacity” means to fire someone and “incentivizing” employees simply means motivating them. Whether or not business leaders use jargon to lessen the meaning of what they’re trying to say, employees may believe that this is happening — if they trust what the speaker is saying at all. Business jargon or abstract language is less believable to listeners, Personality and Social Psychology Bulletin found. Participants in the study judged that concrete statements of the same content were probably more true than when the content was written in abstract language.

Business leaders should strive to communicate clearly. An online MBA can help busy professionals obtain the knowledge and skills needed for efficient communication.