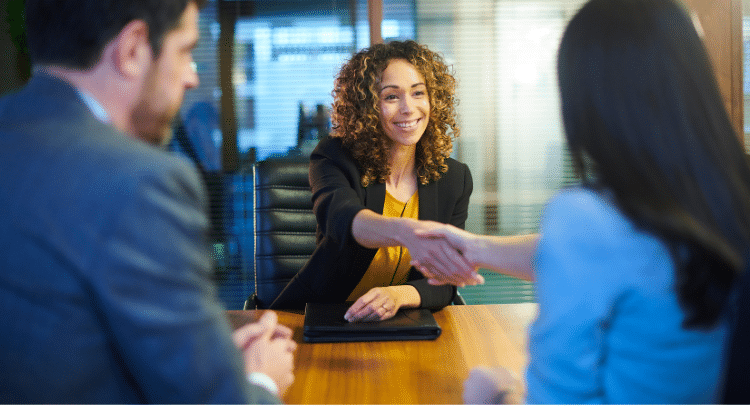 Imagine you’re on the way to a date with a person you’ve only met online. You know lots about them already (actually, far more than you’ll ever admit to), and you think that they’re pretty attractive from their profile and the way you’ve interacted over messages so far – this date could have real potential.

You’re nervous about meeting them, so you’ve made yourself look as lovely as possible – no stray hairs or smudged lipstick today. You’ve already rehearsed some great answers to possible questions, as well as thinking of some intelligent, kooky questions for them. You’re set. All you have to do now is relax and hope it goes well.

Now, think about all of that as if you’re on the way to an interview. Replace messages with emails, and insta-stalking them with a detailed LinkedIn search, and you’re basically performing in exactly the same play.

Okay, you’re probably not going to be jumping into bed with your interviewers (unless there’s some serious chemistry) but you will be judging how sexy those company values are, how much you’ll fit in with the culture, and whether there’s that all-important spark of excitement at the prospect of embarking on this career journey.

My most recent podcast guest, Entry Level Boss author and career-search guru Alexa Shoen, says treating the job search like dating is a surprisingly productive way to secure the right match for your career. Yes, you’re out to impress, but essentially, it’s a two-way system and you’re vetting them just as much as they’re vetting you.

It’s often difficult to think of the job search in this way, as it involves elevating yourself from a subordinate element of the process into a coordinate one. Just like in a romantic relationship, you have to value yourself first. Think about the reasons why this company would be right for you, in addition to the usual mantra of why you’re right for the company.

So many times, candidates fall backwards over themselves in a bid to impress employers before thinking whether they’d actually be a match for the deeper company values.

This is especially true when it comes to gimmicky marketing applications – you’d never put yourself out there by sending a potential date something like branded flowers or cakes before you’ve met them (yes, this happens in a *lot* of marketing and advertising spheres), so why do it with an employer? It can come across as overly desperate and has very much ‘pick me’ vibes – a quick scroll through LinkedIn will clarify what I mean by this.

Worse, if a candidate is hired on their energy and enthusiasm, and then finds out that the job isn’t all it’s cracked up to be, it’s bad news for both employer and employee, and can crush the energy and creativity which got the candidate hired in the first place.

Now, I’m not saying, “Don’t be enthusiastic.” Quite the opposite – turning up to a date with, or interviewing someone who thinks they’re too cool for school is a complete turn off, and far worse than someone who is probably a little too keen. There’s a balance to be struck in the job-search world which involves a certain level of confidence in yourself that the right opportunity will be there for you.

There’s plenty of corporate fish in the sea, so bear it in mind when you’re applying for your next role – if the company were a person, would you really swipe right?