You are here: Home / Equality / “Excuse Me, I’m Speaking” – 4 Ways to Deal with Manterruptions at Work 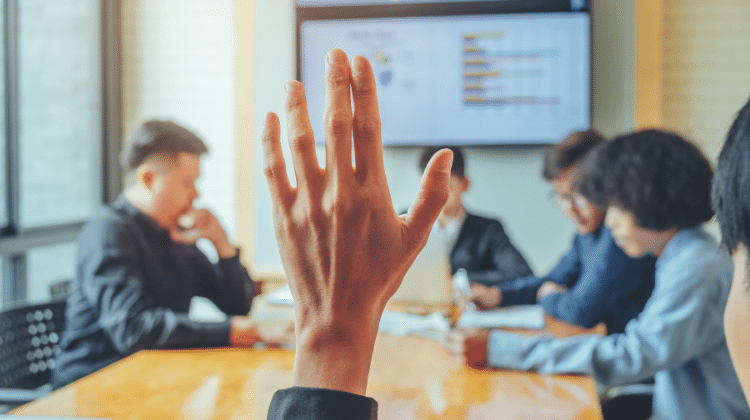 If you think that we live in a post-feminist society, then you can’t have watched last week’s Vice Presidential debate. Vice President Pence interrupted VP hopeful Kamala Harris somewhere between 10 and 16 times. For comparison, she interrupted him five times. If politics isn’t your thing, perhaps you caught the viral Tik Tik video of a 22 year old STEM student at the University of Iowa, Claire McDonnel, trying to get a word in edgeways while being constantly interrupted and spoken over by her male classmates.

I doubt there’s a woman on the planet who can’t relate.

By now, there is a ton of well-researched data indicating that men interrupt more than women, and although they do it to their male colleagues too, they interrupt women far more often. Nearly every woman I know has encountered this phenomenon at work, often time and time again.

But rather than sit seething for the rest of that meeting, only to experience the same thing next time, here are four things you can do right away to make sure your voice is heard without any unwanted input from your male colleagues.

1. Stop Them in Their Tracks

The first time they interrupt, channel your inner Kamala, and interrupt them right back with a “Hang on a second please, Mark,” and then say something along the lines of, “I’d appreciate any comments when I’m finished speaking.” Then go on with what you had to say in the first place. This establishes from the get-go that you’re not going to be taking any nonsense and you’re not going to be walked over at all.

2. Ignore Any Interruptions and Plow On

If you’ve tried the niceties and they just aren’t getting it, instead of stopping speaking, like our Claire does in her viral Tik Tok, the next time they try to speak over you, you can look him dead in the eyes and keep going, until he gets the message. This is a very bold tactic but my god, it works.

3. Have a Private Word

Follow up any rouge meeting etiquette with your colleagues afterwards in a less formal setting. After any interaction where you feel you’ve been unfairly talked over, it’s often productive to have a quiet coffee-machine conversation with your college about their behavior.

These may seem like big steps to take initially, but by following them, you’ll develop the self confidence and assertiveness needed to make yourself heard above the noise, which will be invaluable as you progress in your career.

And of course, these steps don’t just apply to manterruptions. Anyone who’s getting in the way of you making your point should get the same treatment. Why should anyone else’s voice be more important than yours when you’re speaking up? Let me hear your #manterruption moments in the comments!