You are here: Home / Women On Business Partners / Superstars of Tech – 3 Women Who Influence the Business World 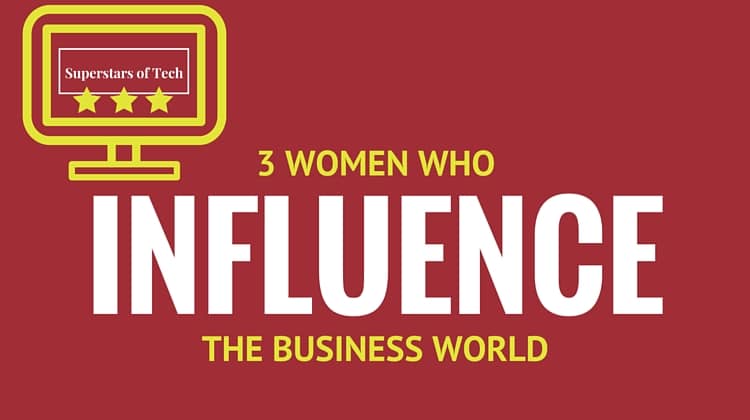 The days of the tech industry being dominated by young, nerdy, smart but socially awkward males may still exist in TV programs like “The Big Bang Theory” and “Silicon Valley”, but in reality, it’s a thing of the past. Today, you are just as likely to find a startup run by an intelligent, confident woman as you are a Sheldon Cooper type.

In fact, women have made greater strides in the tech industry than most other mainstream businesses. That could be because tech tends to reward practical results rather than relying upon an old boy’s network built on family ties and alumni lists. Tech also has more behind the scenes workers than most other industries with more employees laboring in think tanks and tech incubators and fewer people glued to handling customers on sales floors or meeting new clients over golf or cocktails.

Women are succeeding in all areas of tech, from leadership roles to code-writing and software development to human resources and finance.

While challenges still exist for women in tech as they do in any industry – pay equality, being taken as seriously as men, and outright sexism – these are hopefully slowly fading into the past. The latest generation of female tech graduates can expect to see a job market with more opportunities and more examples of successful female tech entrepreneurs than ever before.

Here, then, are some of the most shining examples of how women have been able to overcome the inherent challenges in the tech industry to build both their reputations and the success of their startups.

When Julie Hartz co-founded Eventbrite, her goal was to “democratize” the event ticketing industry. She saw an industry where the biggest events – professional sports games, big-name concerts, the hottest Broadway shows, and so on – got all of the attention while the organizers of smaller, more regional events were left to figure things out on their own.

Where the big players in event ticketing saw small-scale events that weren’t worth their time and effort, Hartz saw opportunity. So she founded her event ticketing service on the notion that no event was too small to make it onto her website.

She also created one other important difference between her company and all the others: People shouldn’t have to pay to use the service if their event is free.

Event organizers can use the site to plan, promote and sell tickets and even publish them directly on Facebook, Twitter, and other popular social networking platforms directly from the Eventbrite website. The company makes money by charging organizers a fee of 2.5% of the ticket price plus $.99 per ticket sold, except for tickets for free events.

This “big tent” policy opened the doors to all users, no matter how small. It also helped push Eventbrite to the top of the list of event ticketing websites, maximizing the company’s growth and pushing its reputation to global proportions.

Born in Lucknow, India, Rashmi Sinha didn’t fit anybody’s idea of a tech mogul. But while studying for a PhD in cognitive neuropsychology at Brown University, Rashmi took courses in human-computer interaction, eventually transferring to the University of California at Berkeley to focus on this subject.

Eventually, she left academics to launch her own consulting business focusing on optimizing web users’ experiences. That led to her and her older brother building SlideShare, a site for people to share presentations online. Since its launch in 2006, more than nine million presentations have been uploaded to SlideShare, and in 2012, the company was sold to LinkedIn for more than $100 million.

In 2008, Fast Company named Rashmi one of the World’s Top 10 Influencers in the Web. In a recent talk at Stanford University, she said that the key to a successful startup is recognizing what stage your business is in. Businesses grow the same way that people do: They go through a series of stages until eventually they become what they were meant to be.

It’s not always possible to force a business to move from one stage to another, according to Rashmi. It’s something that often has to happen organically.

Carly Fiorina made a big impression as the head of Hewlett-Packard, one of the world’s largest and most influential computer companies. As CEO, she was the first woman in history to lead a company in Fortune magazine’s list of the top 20 companies worldwide.

She led HP through what, at the time, was the largest merger in tech industry history in which her company acquired rival computer maker Compaq, jettisoning HP to the world’s biggest seller of PCs. But she also presided over the computer giant’s downsizing period, in which 30,000 US employees were let go.

After successfully running one of the world’s biggest companies, Fiorina was very publicly fired as CEO by the HP board of directors in 2005. She went on to serve on the board of several prominent organizations, including Revolution Health Group, the computer security company Cybertust, and chip maker TSMC.

After aiming unsuccessfully at the US Senate seat in California, Fiorina has set her sights on a bigger prize: She currently is one of the Republican candidates for President of the United States.

It’s a strategy Fiorina has used successfully in business and one she said she plans to bring to the White House.

“Leadership is not about position, power or title,” she said. “It’s about unlocking the potential of others. And I think now, in this nation, we need a leader in the Oval Office who understands how to unlock and unleash the potential of this nation once again.”

A staunch conservative, Fiorina has recently compared herself to the right-wing British Prime Minister Margaret Thatcher, a comparison that brought the criticism of the Internet crashing down on her head. Despite this, she continues to speak her mind and set out to change attitudes toward women in tech, in politics, and in society at large.

The tech industry has always been on the leading edge of innovation. With these examples of women in tech, the industry is now leading the world in attitudes towards women in leadership positions and the contributions they can make to industry and society at large. Boston-based, time and attendance software company, Advance Systems agrees with Carly Fiorina when it comes to unlocking the potential of others. Advance Systems recognizes talent at a level that goes far beyond gender. Understanding the power of the employee based on talent and not gender, sexual orientation, or belief is key to building a successful business.