You are here: Home / Archives for board evaluation 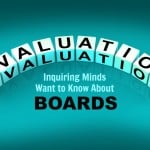 The Wall Street Journal reports approximately 19 percent of the largest public U.S. companies hired an outsider to evaluate their boards in 2013 — a 17 percent leap since 2010. Those numbers come from Spencer Stuart, an executive search firm. In five years, up to 35 percent of major companies could be putting "board doctors" to use. Financial and banking firms were some of … END_OF_DOCUMENT_TOKEN_TO_BE_REPLACED