You are here: Home / Archives for handshake 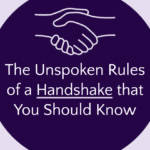 If you thought the handshake was just a customary way of greeting someone, think again. There is more to a handshake than the verbal interaction that takes place during the meeting of hands.  The concept of a handshake dates back at least as far as Ancient Greece, when shaking hands was more socially acceptable than bowing or curtseying. Shaking hands was a way for both … END_OF_DOCUMENT_TOKEN_TO_BE_REPLACED