You are here: Home / Female Entrepreneurs / The Work that Women Choose to Do

There was a time in my life when the work I did was work I could get…sometimes survival mode dictates our direction.  I’ve worked as a waitress, a receptionist and file clerk to earn a paycheck.  Those were not choices, those were positions available.  And I almost didn’t get those because I was “over qualified.”  In fact my first waitressing job I very nearly didn’t get simply because I had a college degree.  But I was also a single mother with a tiny baby and no other choices at the time.

Looking back I’m grateful to past employers because it allowed me to feed my family, pay my bills and get on with living.  And now I’m at a place in life where I do get to choose my work and it’s a great joy.

I love knowing what other women choose to do for their work.  I have a friend, a true entrepreneur, who is both a painter and a gallery owner.  She loves both sides of her life – the artistic creator who paints her fantastic surrealistic pieces, and the business woman who plans and markets and keeps the books.  I have an aunt who, after the passing of her husband, has taken a huge role in the operations of his business…something she previously did not do – and she’s discovered she’s quite good at it. 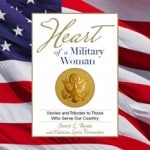 On December 1, a new book in a series of “Heart of…” books became publicly available [Borders bookstores and Amazon.com] titled, “Heart of a Military Woman.” Now there are a couple women’s stories in this book that I want to mention because of the work they chose to do, but I want first to mention the authors themselves: Sheryl L. Roush and Eldonna Lewis Fernandez.  What these two women choose to do as their work is fascinating and exciting.

Sheryl Roush is, from the book, “…an internationally top-rated speaker, and was only the third woman to earn the elite Accredited Speaker designation from Toastmasters International…she is the President/CEO of Sparkle Presentations, Inc…”  From her website, “…She has presented over 3,000 programs in nine countries….”  I think this is terrific, that there is a woman in the ranks of top inspirational speakers in the world.  This is a business category that needs more woman role models for up-and-coming female speakers.  Public speaking…not to mention inspiring and encouraging others from a stage…is something I have no gifts for and I admire those who can.

Eldonna Lewis Fernandez is a retired Air Force Master Sergeant with 23 years of honorable military service.  Her choice of work in the military is one of the stories in the new “Heart” book [in the same chapter in which is my own short essay – I was a journalist during my service in the U.S. Navy] that I find fascinating.  She served in the Honor Guard.  How many of us have ever given much thought to the Honor Guards we see at military or presidential funerals, leading off parades and even at airports welcoming international dignitaries?  Even when I was in the military, I didn’t give thought to this crack team.  From her essay Eldonna says, “…The Honor Guard is about precision in military honors…My entire experience on the Honor Guard is one I’ll cherish for a lifetime….”

What she chooses to do now is just as fascinating [Pink Biker Chic – what a cool name!] – from Eldonna’s website: “…serves on the board of the International Empowerment Education Foundation, and coordinates the speaker’s bureau for the Women’s Peace Campaign. She is also a member of the District One Toastmasters Community Speakers Bureau…Eldonna is affectionately known as the Pink Biker Chic™, a biker and empowerment coach for women – utilizing the PINK principles of – Power, Integrity, Nurturing, and Knowledge….”

The “Heart of a Military Woman” book has another essay about a woman who chose a job unusual…one you don’t hear about or read about – that of cargo handler.  I know that planes get loaded with “stuff” and that someone has to do the loading, but I never gave thought to the importance of it until I read this essay.  It’s written by a marine captain who saw this woman’s skill and leadership for himself when he worked with Petty Officer Raquel Santiago, USN.  There is a romantic ending as these two people ended up marrying before he spent a tour in Iraq.

Raquel’s story as described by Captain Gravseth is heartwarming and motivating.  Raquel’s reserve unit was called to Singapore after that horrible tsunami in 2004.  Cargo came into the area by the tons but it wasn’t leaving in an organized fashion to help those who needed it.  From the essay, “…Orchestrating the action, the feisty Latina from New York inspired her weary team to continue. With entire nations depending on these supplies getting to their devastated homes it was the cargo handler’s most important mission ever…For the first time since the global disaster, a U.S. Navy cargo ship would leave Singapore at full capacity.…”  This is inspiring work that shows the power of leadership a woman can bring to an unusual job.

None of us is one-dimensional.  Raquel is also a jewelry artist, her designs, RSVanity, can be found here.

I still see articles in news magazines about glass ceilings, but I’m convinced that there is no work a woman cannot choose to do.  Yes, she may have to fight her way in and yes there may be some work that will require adaptations in order to do – women will never be as physically strong as men – but we can adapt.  Someday it will not be headline news when a woman achieves leadership.