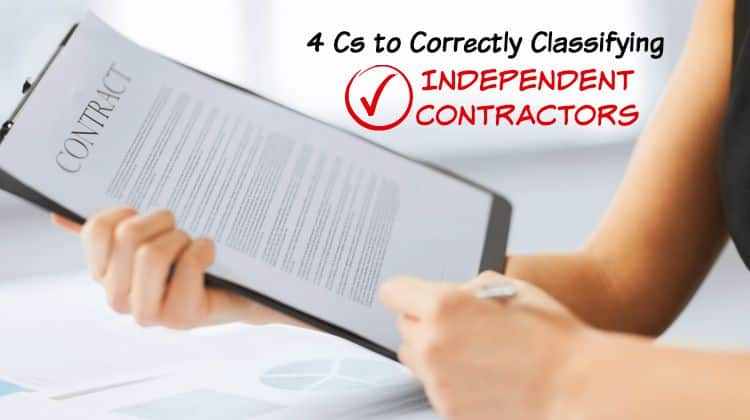 From Uber and Lyft drivers to New York nail salon technicians, the media has been highlighting questions regarding correctly classifying workers. Are they independent contractors? Or are they employees? The answer can determine how much risk businesses can transfer to workers. Also hanging in the balance are overtime pay, worker’s compensation, and unemployment insurance issues.

On the other side of the country, a California federal district court found that whether Uber drivers could be properly classified as independent contractors was open to debate. Rejecting Uber’s argument that it was a “technology company,” the Court emphasized that it was “obvious drivers performed a service for Uber” because Uber would not “be a viable business entity without its drivers.”

Taking Uber’s lead, in early July, Lyft drivers filed their own class action lawsuit in Florida, arguing that Lyft misclassified them as independent contractors and failed to pay minimum wage and overtime compensation.

With this hotly debated topic, business owners need to think about how to properly classify their workers so that they do not become the next lawsuit target. Using “the four Cs to classification” — control, conduct, concentration, and core business — may help guide you toward proper classification.

And recently, the test became even broader, encompassing not only whether you control your workers but whether the business could have exerted more control. Even if you do not regularly set hours or tell your workers what to wear, could you?

Evidence that you as the business owner have the ability to control the worker strongly weighs in favor of the employment relationship.

Conduct — even informal or merely verbal — can trump written contracts. Some believe that a formal independent contractor agreement that “legally” defines the relationship would be binding and decisive. But it isn’t. The actual conduct is more important than what is typed on paper.

For example, do you require your workers to attend meetings, or participate in mandatory training? Are they expected to follow rules or procedures? Are you supervising the worker? If so, they are probably employees even if they signed an independent contractor agreement. Independent contractors typically make their own rules. They are not forced to conform to the business owners’ procedures.

Does your worker concentrate his or her work for your business? If the worker works exclusively for you, he or she is probably an employee. Since independent contractors manage themselves, they have the flexibility to dictate their own schedule and have the freedom to simultaneously work for many businesses.

Generally, if the workers are part of your essential core business, they are likely to be employees. The sales people at a retail clothing business are probably employees because they are selling clothing — the retailer’s core business. On the other hand, an independent contractor takes more of an incidental role in the business. For example, someone who handles the retailer’s computer systems and security technologies might be an independent contractor because the retailer isn’t in the computer or security business.

Properly classifying independent contractors has been a struggle for many business organizations. As the U.S. Department of Labor recently emphasized, although “independent contracting relationships can be advantageous for workers and businesses, some employees may be intentionally misclassified as a means to cut costs and avoid compliance with labor laws.”

It is important to carefully think through all factors before making the ultimate decision on how to classify. With the misclassification trend, the four Cs can help you avoid missteps while navigating through the proper classification minefield.

Erin R. Mindoro is a partner with Berger Kahn, a law firm in Irvine, California. Her practice in employment law has placed her ahead of the challenges facing women in the workplace including wage and hour and classification issues. With a joint JD/MBA, Erin is dedicated in her work to the fair and humane treatment of employees and the success of business owners in her practice at Berger Kahn, where she is ranked among the top 50 up-and-coming attorneys in Southern California by Super Lawyers magazine. You can connect with Erin on LinkedIn.