You are here: Home / Women On Business Partners / 8 Cities Booming with Financial Jobs 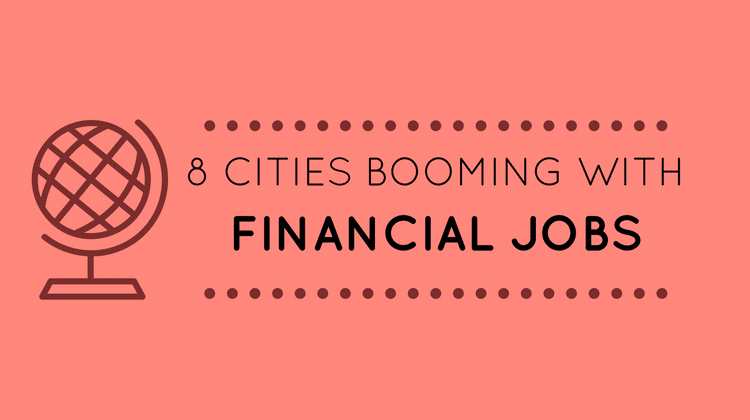 Finance jobs have always been as lucrative as the subject itself. Why is that? Well, finance is essential in all aspects of business, and for this very reason, finance workers have traditionally found places to work. However, like economies and currency values, financial jobs of a country — and even of cities — differ from one another. This raises questions about which cities offer more and more importantly, how great the finance job opportunities are in each city.

Today, we take a look at eight different cities which have recently, if not longer, boomed in the finance sector and are racing to be “everything finance” cities.

If you’re an asset person, Boston is for you! Boston is booming at assets management with big players Putnam and Fidelity Investments. If you’re in this career for big cash management, Boston might be your choice of employment with its $2,514 average monthly rent (AMR) for a 1-bedroom apartment — big rent for big cash. This city really does offer the high-end career map for people with high goals.

In addition, Boston has shown better stability during past economically recessive periods, making it a welcoming home for financial professionals people.

Chicago is known for its financial hub of the U.S. with all the large banks, financial companies, and brokerage firms established in the city. It’s also home to some of the biggest news agencies such as The Chicago Tribune.

The city offers one of the highest rates of accounting jobs in the United States, more than 80,000+ people working in Chicago as accountants, bookkeeping clerics, auditors, etc. There is a very high demand of experienced financial analysts in this region.

Behind the luxurious appearance of Dubai, lies its financially boomed industry which is transforming the city to a financial capital of the cash-pumped Middle East. Dubai is a city with huge potential in the finance market with opportunities that are attracting global players. It’s a mega-metro emerging in deserts of the Middle East that’s becoming a crux in the finance world.

The point is, this city might just be the one that will move your finance career beyond imaginary goals to make it a reality.

Ever seen fireworks? Hong Kong offers some of the most intense fireworks around the globe. Guess what’s as positively explosive as its fireworks? You guessed it! It’s their financial sector. However, the city is way more accessible in terms of jobs when you know how to speak Chinese in addition to English. Its AMR for a 1-bedroom apartment is $2,185.

A city dancing in waves of China’s economic upsurge, Hong Kong is an attractive gateway for financial careerists. Moreover, Hong Kong has the finest of Asian grandeur to offer for shoppers and life stylists.

Land of the industrial revolution, London is, still today, one of the front runners in world of finance. Being the financial capital of Europe, it’s home to pioneering finance companies and a field for big leagues. London’s currency trading beats its close rivals by as much as twice the market share.

Although the Brexit incident has shaken quite a chunk of jobs in London, the city is experienced enough to thrive in economic persistency.  With rich cultural offerings, historical depth, and an advanced standard of living, London is the perfect place for finance jobs. The old city of commerce has an AMR of $2,185 for a 1-bedroom apartment.

A city that is considered the financial capital of central Europe by many contains some of the biggest European finance company headquarters. Frankfurt offers great tourism alongside the opportunity to explore greater Europe. Also, the city has a relatively lower cost of living.

On top of everything, many company headquarters moving to the city from London after Brexit makes it an attractive place to work in finance.

Once rivaling with New York, Tokyo is the world’s second largest economy today. Hence, it has all the Japanese finance company headquarters at its core. The Japanese economy recovered recently from its set back of 1991. After a decade lost, the country is set to thrive.

Not knowing Japanese can be a hindrance for job seekers. However, getting transferred to Japan from an international company is a lucrative challenge. With an AMR for a 1-Bedroom Apartment being $1,167, Japan is the finest of east in culture, lifestyle, heritage, and modern living.

Zurich, home to Swiss Bank, offers a myriad of finance job opportunities. If you’re eager to work in personal finance and wealth management, this city has the best to offer. Transitioning to and thriving in jobs in this city are smoother for someone who knows a bit of French or German. Nevertheless, high-qualifications will make you an attractive candidate even if English is your only language.

Zurich is hub for fine culture, high-end life, and advanced technology. It’s an all-in-one city to experience the best of Europe.

Teeming with brokerage firms and banks, San Francisco is a financial mine skewed to the tech side because of it’s nearness to Silicon Valley. The western Bay Area is home to venture capital companies powering up the mass of startup ventures.

If you love the idea of working for finance companies that help tech corporations thrive, this city is your oasis. But! It’s AMR for a 1-bedroom apartment is $3,490 – a huge chunk of money. On the flip-side, San Francisco is the Paris of America – great wine, fine diners, and the finest Jazz — the perfect treatment for your taste buds and cultural fix.

Where Do I Go?

Overwhelmed ? Can’t wait to make an escape to your city of dreams? Remember that every city mentioned above has its own combination of benefits. Wait no more and choose the perfect fit for your finance career!