You are here: Home / Female Entrepreneurs / The Benefit of Having an Accountability Partner as a Solopreneur 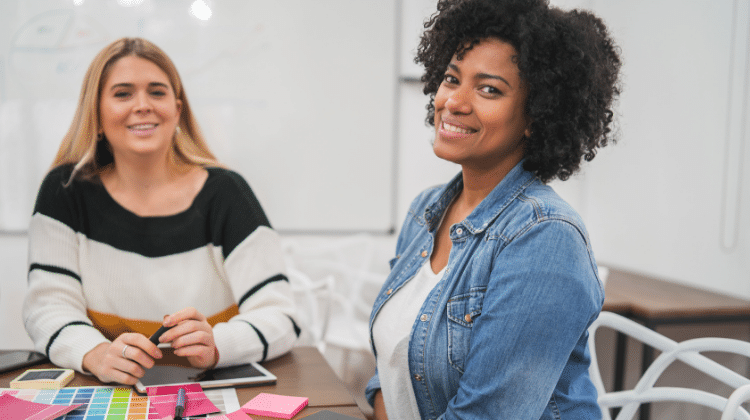 As a health coach, I understand the power coaching can have on an individual to tackle a goal and follow it through to completion. That’s why I joined a local running coaching group this year to finally learn how to run.

Before making this commitment, I had spent hundreds of dollars on a gym membership that I didn’t use even though I promised my husband that I would this time.

So I thought, “Okay, well, I’m going to do home workouts,” and I downloaded a free beginners guide to running. I even bought myself a stopwatch and got some running gear because I really believed in my convictions.

Did I do it? You guessed it, nope.

Meanwhile, I’m coaching my clients and witnessing them achieve their goals and making huge headway in their health and fitness, and I was starting to feel like I was missing out. Clearly, I needed a coach too.

In the next two weeks, I attended a local runner’s group meeting where I met Vic, who was a running coach. At the time, when she told me, I remembered thinking I’m not fit enough to hire a running coach. Looking back, that sounds really odd because who’s says they’re not healthy enough to work with a health coach!

So when 2021 rolled in and I was determined to make 2021 the year of fitness, I messaged Vic and said that the new season is about to start. I immediately said sign me up.

To date, I’ve done six runs, and I think I’ve officially felt the runner’s high that runners speak about. I can visually see myself running a year from now, which I never had ever felt before.

But what made the difference for me?

Cambridge Dictionary says accountability is the fact of being responsible for what you do and able to give a satisfactory reason for it or the degree to which this happens.

When you’re accountable to yourself, you can come up with a million and one reasons why you don’t want to go for a run today. Since you’re answering to yourself, we’re hardwired to go for the easier option, so we’re likely to oblige.

But we know that humans are social creatures. Therefore, we’re more motivated by each other and are likely to do the thing we said we were going to do because we don’t want to let other people down.

However, if you are a solopreneur, what can you do?

The Benefits of Having an Accountability Partner

For me the benefit of having an accountability partner is having someone to chat to when things get hard. They are my soundboard where I can bounce ideas with and get instant feedback. They help me maintain momentum by keeping my focus on my goals and celebrating all my wins, successes and milestones that might not be apparent to anyone else.

It’s important that once you identify an accountability partner you want to work with, make sure you’re both on the same page.

Accountability partnerships breakdown when either party is unclear on the accountability measures. If you’re not sure what you’re accountable for, then nothing gets done. For me, have a weekly date to catch up with a rough agenda helps me set KPIs and deadlines that we can be accountable for.

Being a solopreneur is scary and requires us to step outside of our comfort zone. It’s a given, so both parties must be willing to commit and follow through. Sometimes people are scared and lack confidence. It may feel too risky to take accountability. I often see this show up in people as procrastination and perfectionism, which we all can succumb to. However, you can call it out and have a plan in place to deal with these sort of situations that otherwise impede momentum and growth.

Last but not least is when either party doesn’t care enough about their work. It could be for several different reasons such as being scared and lacking confidence, but often, they just don’t know how important they are.

As I said, humans are social creatures and we don’t want to let other people down, but sometimes we do because they underestimate the importance of their role as an accountability partner, which brings me back to point #1 – that both parties are clear on the accountability measures.

Let me know in the comments below what you found most helpful!

Merly Hartnett is a certified Health Coach and Holistic Career Specialist, working with career mums to conquer chronic stress and balance their hormones naturally. She has a corporate background in occupational rehabilitation, runs her own coaching business from home and is a full-time mum. Merly believes when women are living in flow with their cyclical nature, they can begin to lift themselves out of emotional and physical exhaustion and thrive in both their personal and professional life.