You are here: Home / Women On Business Partners / Boss vs. Leader- What Are the Differences? 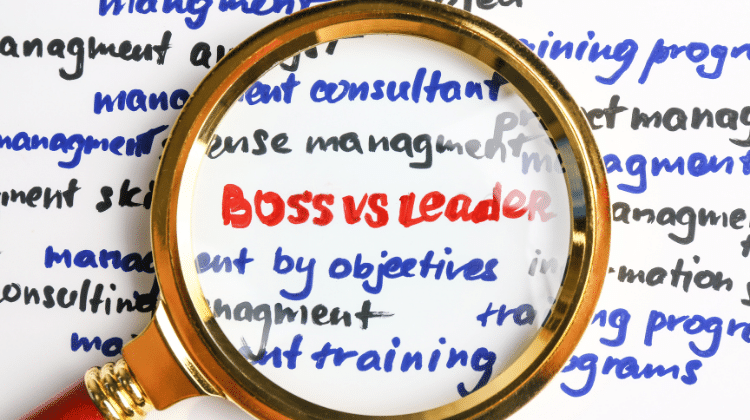 Brought to you by Sapio Research:

Are you a boss or a leader? Find out the differences here!

The words “boss” and “leader” may seem very similar if you look them up in the dictionary. But in the business world, the two have very different practical distinctions.

Just think for a second what comes into your mind when you hear the word “boss.” You instantly think about someone who demands and yells at you when you screw up and, obviously, has the power to fire you whenever they feel like it.

In contrast, when you think about the word ‘leader,” you associate it with a figure that inspires, helps, and works alongside you.

So, do you know which one you are? A boss or a leader? Keep reading below to learn the differences between the two supervisor types.

Can you guess who uses which word in their speech? Most likely, yes. Leaders use the “we” word while bosses use the word “I.” Can you see the difference in the impact these two words have?

Leaders have a team-first mentality. They use the word “we” to refer to the entire team, including themselves, because they feel part of a team. In contrast, bosses place themselves above their employees, using the word “I” to only dictate their views and requirements towards how their employees should do their jobs.

In other words, when the term “we” is used, the person in charge isn’t thinking about how to please the boss but rather about how to make things good for everyone in the team.

When the word “I” is used, the mind is focused on a single person and what that person’s preferences and needs are.

Leaders Invest in People, Bosses Use Them

Another major difference between a leader and a boss is how they treat their employees in terms of helping them grow professionally and personally.

Bosses in work climates that are toxic use their employees to climb the corporate ladder. This is a great example of the “me” mentality. Using employees means bosses give them unrealistic deadlines, ask them to overwork, and don’t accept the idea that some things can’t be done the way the “boss” asks.

In contrast, leaders support the idea that investing in their workforce is a strategy that benefits everyone. This is an example of the “we” mentality.

Investing in people is a great way to help them develop both personally and professionally. And a leader knows that an employee who feels that the person in charge invests in them is an employee who will go above and beyond to prove they are worth the investment.

Investing in people is a great way to help them become self-motivated. A leader knows that.

The difference between a boss and a leader also lies in how the people they work with see them.

There is a significant difference in how employees see a leader vs. how they see a boss. Employees fear their boss. They also don’t like to work anywhere near their boss because they feel like the boss is watching them to see their mistakes and yell when errors do appear.

In contrast, employees respect leaders. They respect them for the fact that a leader pays attention to their needs because they see the leader as a capable person who can help them avoid or fix their mistakes.

So, a boss is often associated with a person who tries to control the entire office by inspiring fear and acting something close to a bully, while a leader is a person who employees look up to for inspiration and support when needed.

Sometimes you don’t have to work for a company to understand whether the employees have a boss or a leader. There are some signs that even customers or clients can notice that show either of these two styles.

When leaders are in charge of marketing, for example, using thought leadership in business, they can answer the biggest questions on their target audience’s minds on a particular topic. When bosses try to do the same thing, they only try to convince their customers to buy from them without inspiring them by providing actual reasons.

Bosses tend to be the ones that take credit for the hard work their employees have done to get good results. They are the ones at the corporate party at the end of a fiscal year who get on the stage to give a speech but forget to say “thank you” to the employees who actually did all the hard work.

In contrast, a leader is a person who, at the same party, would probably ask the entire team to get on the stage or would at least incorporate a few thanks in their speech.

Besides that, bosses and leaders have a different attitude over giving credit throughout the entire year as well. Leaders feel proud when an employee or the entire team accomplished something and make sure to verbalize it. On the other hand, bosses don’t even notice the accomplishments of their employees, or if they do, they don’t feel like congratulating the person for it.

In the business world, delegation is seen as an essential strategy. At least, leaders see it this way. Bosses see it as their enemy.

Delegation is a challenging yet effective thing to do. It requires trust. More specifically, when you delegate a person to do a certain task, you need to trust that person with being capable of doing it. Leaders tend to show such trust, and if it happened to be wrong to do so and the employee need help, leaders don’t mind providing it.

In contrast, bosses prefer micromanagement which means carefully controlling whether or not an employee does the task just as the boss wants them to. Micromanagement is a sign of distrust towards the abilities of team members to handle the job.

So which are you? A boss or a leader? Now that you know the differences, you can work to be the best leader possible and leave the bossy traits behind.