You are here: Home / Reader Submission / The Crushing of the American Spirit and Work Ethic 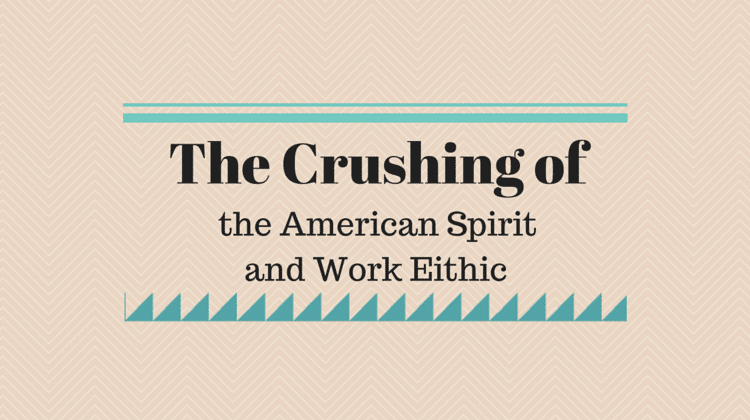 Part I: The Quest for Success

“If this deal goes through, you will have the privilege of working for the largest Pharmaceutical Company in the world!”

Ava looked around at the other 12 faces in the small department meeting that was happening in the midst of a chaotic and feverish corporate leadership conference. She quietly observed how not one person looked motivated, fulfilled, or the least bit engaged at that statement. This is the short story of how the collapsing/mega merging of corporate America with the sole focus on the shareholder has absolutely crushed creativity, passion, and the American work ethic.

This true and sad tale begins nearly 12 years ago when a woman in her early 30s finds an amazing opportunity for a second career after spending nearly a decade in recruiting. Ava is a reluctantly successful woman that finds herself doing far better than she ever expected in business. A Psychology major from a Cal State University—simply due to a mildly interesting list of classes and the fastest way out on a mostly self-funded education—had somehow tapped into a higher than average business sense and a natural ability to lead.

Ava gives the credit to these skill sets, not at all to studying but 100% to the fact that she was the oldest of three in a tough love upbringing that got channeled into working with a high sense of urgency and flat out fear of failure. In this new work environment, it almost seemed easy to separate herself from the relaxed and—simply by lack of experience—unappreciative colleagues around her.

Ava had been in a brutally competitive environment in her previous staffing career surrounded by women that would gut you like a fish to get credit for a deal. The pharmaceutical industry had a reputation for better hours, great budgets for business networking, and overall just a better “mommy” career. Although Ava saw this rationale as weak and a total cop out, she took a leap of faith with a 45% cut in pay as the primary breadwinner and never looked back.

No one was more surprised than Ava at how much she enjoyed her job. Not a little…. but a lot, in fact absolutely loved it! This career was incredible and not at all for the reasons that she went for it. The industry was dynamic, exciting, and stirred a new commitment to not just do well but WIN.

Ava gravitated to the like-minded personnel around her and navigated through multiple promotions in her first several years with each step bringing more internal pride, passion for the organization, and let’s not forget—the money. She was so grateful for the job and although never fully free of guilt rooted in work travel as a Mom, in her career, she was thriving. No one would’ve disagreed, and what could possibly get in her way?

Nearly a decade into a career in pharmaceuticals the rose-colored glasses were a little foggier—but in Ava’s eyes—were only due to external influences perhaps looking for excuses for poor decisions. The chatter was getting louder, and the new regulations created just a little more doubt in herself and those around her.

Ava always knew her industry was profitable and she earned a great living, but she never lost sight of the medications her company promoted and the patient benefits in these important disease states. As much as Ava kept her optimistic “attitude of gratitude,” she knew in her gut that something was different. The tides had turned. The winds of change had begun to pick up, and although she could feel it, she could never have predicted the bumpy ride ahead that would leave her with a double black-eyed view of business forever.

In 2012, there was a new fever in business. Mega billionaires were getting extended press time on financial shows, and somehow, simply due to their padded wallets, were now the bona fide gurus of healthcare. Pharma was a wildly rich opportunity and an easy target for the highest individual profitability and a new demon to target the old news of flailing, greedy, and overextended banks. Young CEOs with Ivy Degrees and frankly, big balls due to the long runway of career ahead, were making bold decisions and leading incredible business mergers.

Ava and her peers had long been protected in a sweet spot of mid-size pharma. Although it was a public company, the culture was prideful, family-like and even with those characteristics, beyond profitable. These exact characteristics drew the business sharks circling with the smell of blood a mile away in the water. We all could’ve predicted in hindsight what would’ve happened. That amazing mid-size company got purchased and four large transactions later now stood as a behemoth with a fantastic reputation in the short-term all based on extreme stock growth and a darling of Cramer.

This all felt good for a bit, but we all know that beauty is skin deep and the real house of cards—with a weak skeletal structure of cost savings as wide as the Grand Canyon across to the beyond wealthy Executive level—was showing deep cracks. The company, now with a mega portfolio, yielded double digit growth only deeply rooted in frequent price increases was now transparent to all.

The swift changes coded under synergies simply meant one person doing the job of four and beyond all else should do nothing but appreciate it. “Be thankful, don’t share your thoughts, and all that confidence we had in your opinion over the years….please, if you care about keeping your job, for the love of God, just be quiet.”

The remaining leadership from multiple companies past have done an outstanding job of perfecting denial. A denial that all of this profitability has created a better place to work. Opportunities with open positions on end never admitting that these multiple openings have been caused by a costly growing turnover percentage of those without any pending stock options to jump this giant cruise ship that is fiercely adrift.

Today, the loud rah-rah Corporately continues, now only coming from those on the stage, not the employee base weakly clapping in the auditorium, heads spinning in new cultural change. Ava’s white-knuckled grip on to a history of loyalty and success is weakening and ultimately barely hanging on.

As she sat in that room watching the blood-drawn faces of those having endured so much negative change with the pending announcement of more of the same, it’s becoming impossible to not see it so clearly. This past couple of years is not just a phase. It’s the new normal and will no longer be enough.

The naïve girl in Ava still wants to believe that it will get better and that the incredible peer group she’s formed will be the foundation to have them all endure, but deep down she knows it won’t. This environment has not only crushed her work ethic but fundamentally destroyed her confidence in the professional human spirit, and that is just not acceptable for the long term. It’s time for a change, and without a rudder, Ava just doesn’t know where she’ll end up.

As Ava considers what path to take next knowing that she can get and deserves more, she is struggling with internal doubt on if she has the courage and energy to do it all again. Her Dad’s voice echoes in her head. “Don’t be a job hopper, put your head down and do a great job and good things come to good people.” Ava couldn’t agree more with at least most of it. But the times of employee loyalty are now long gone, not because of the knee-jerk public reaction shouting that this generation is greedy but simply because the employer can no longer be focused on their people when the shareholder trumps them every time. I

f and when Ava jumps into the next company and career, she is all the wiser to know to look far beyond a balance sheet to evaluate the healthiness of a company for employment. Big or small, public or private, her primary barometer for personal attachment should lie in the leadership, and if they remember that the people that work for them are truly the difference maker.

This article was written by Ava Michelle.