You are here: Home / Reader Submission / Global Business Attitudes to Risk – What are the Facts?

The modern world of business is incredibly fast paced and quick to develop. The globalisation of business and the way in which new technologies have allowed us to communicate data and information instantly, have contributed to the creation of a system that is both incredibly responsive but also faces a great number of threats.

Consequently, anyone looking to succeed in this environment will have to be aware of the shifts and trends occurring in general business behaviour, while also maintaining a talent for identifying new and emerging risks. With this in mind, Lloyds have recently released their 2013 edition of the Risk Index. Here we take a look at what the report means for businesses around the world.

What are the General Attitudes Towards Risk?

The Lloyds Risk Index was first published in 2009 and aims to assess the prevalent attitudes towards risk and risk management amongst those working in the corporate world. It examines the opinions of business leaders from across the globe, with a greater number of respondents (77%) representing smaller companies with a turnover of less than US$499 million.

In terms of methodology, the report asked 588 C-suite and board level executives what their attitudes were towards 50 different risks that spanned five broad categories. Those responding to the survey were asked to provide a rating, with one the lowest possible response and ten the highest, as to how much of a priority this risk was afforded in the business and to what extent the business was prepared to manage the risk.

The survey produced data that gave an indication as to what the top five global risks to business are considered to be amongst corporate leaders. Notably high on the list of priorities was ‘high taxation.’ This comes as no surprise when placed in the context of the recent economic downturn and an increased public concern surrounding taxation and corporate ethics. The idea that some of the largest companies in the world are avoiding paying their fair share of tax has not been a popular one amongst voters, and businesses appear to be concerned that this could result in national legislation and global action that forces higher corporate taxation.

The global recession and reduction in spending power also acts as the motivation for what is seen as the second most important risk to business, a ‘loss of customers.’ Austerity across the globe has meant people aren’t able, or willing, to continue spending at levels seen in the past and this has caused concern amongst businesses worried that this could seriously impact upon their success.

The risk which was identified as being the third most important highlights the vital role technology now plays in most organisations. The threat of cyber crime and the risk it poses to profit has led many businesses to look at ways in which they can protect themselves in the digital age. Fourth on the list is the ‘price of material inputs.’ Essentially, this translates to concern that the cost of raw materials is growing to such an extent that it threatens profit margins. It is seen as particularly dangerous in combination with the effects of the global economic slowdown and lower customer spending levels. Finally, the fifth most important risk amongst those questioned was said to be ‘excessively strict regulation.’ However, at this stage this remains more of an abstract concern, as strict regulation seems a long way from being implemented. 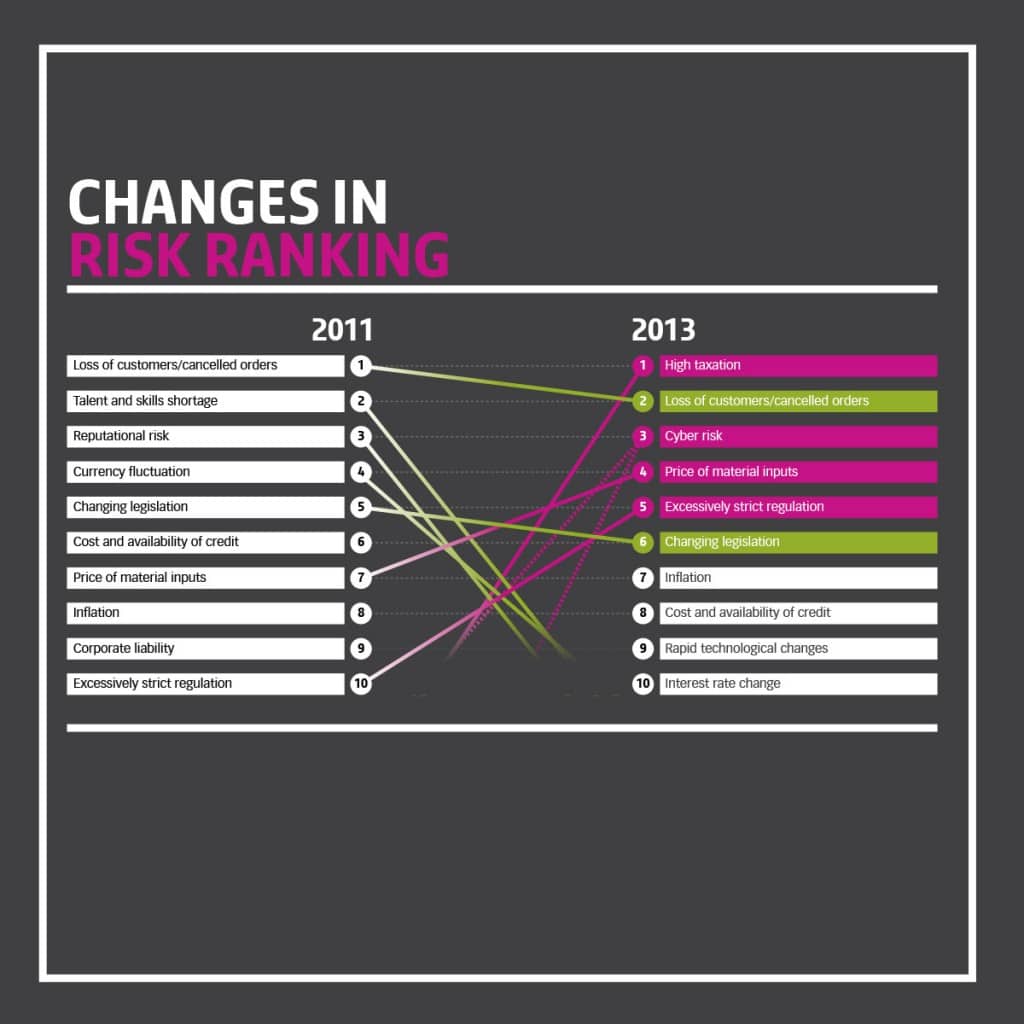 The Role of Geographical Boundaries

One of the most important pieces of analysis to come out of the survey has been exactly how concerns and priorities vary over geographical boundaries, between ‘established’ and ‘developing’ markets, and amongst smaller and larger businesses. For instance, risk priorities amongst US businesses deviated slightly from the global norm. While they still rated ‘high taxation’ as the foremost business risk, ‘cyber risk’ became the second most important, ‘loss of customers’ was the third, ‘changing legislation’ the fourth and ‘inflation’ the fifth. The variations in priorities according to geographical locations gives us a better indication of exactly what kind of response economic issues are generating amongst businesses all over the world.

The image below provides greater detail about regional differences in risk priority. 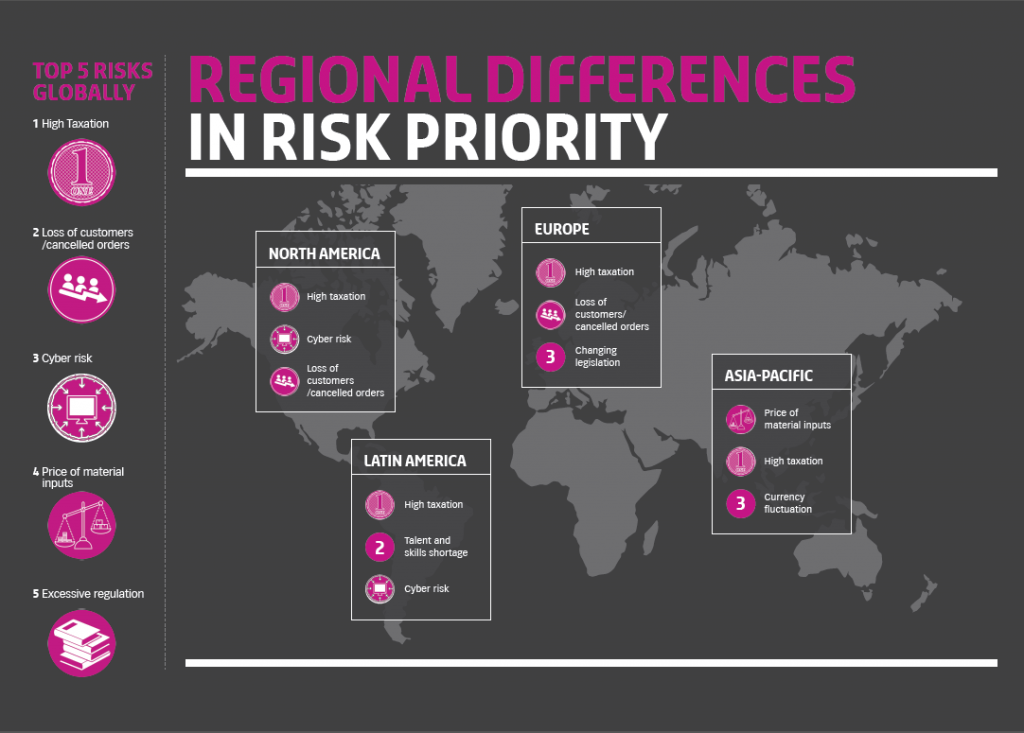 Similarly, there is a measurable difference in the way small (turning over less than $500 million a year) and large businesses view risks generally. Smaller companies show a tendency to prioritise risks less and, consequently, prepare less to mitigate them. However, with less investment available to analyse and intitiate preventative measures, this is to be expected.

Finally, the Lloyds Risk Index raises interesting questions regarding what businesses can do to prepare for such risks. While some risks, such as ‘cyber risk,’ seem to simply involve greater investment in preventative systems, others aren’t as straightforward. In terms of higher taxation, it appears that businesses need to keep up a strong dialogue with local authorities, particularly as it seems as if the concern is based upon the ambiguous nature of government action. Businesses will also have to work hard to maintain their reputation and build their brand to avoid losing a debilitating number of customers or orders. It will be those companies that remain in the public consciousness (for positive reasons) that succeed over the coming years.

The regional top five priority and preparedness scores are provided in the image below. 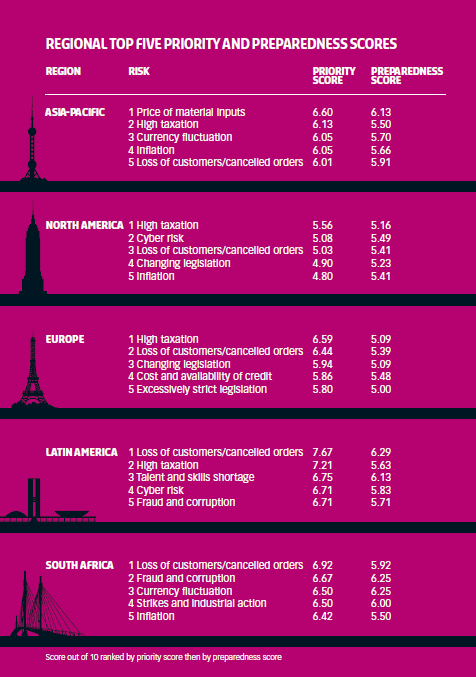 There are, of course, certain things you can do to prepare yourself for the potential risks which are common in the field of business. Keeping a close eye on the cash-flow situation, making sure you constantly strive to be innovative and ensuring staff are kept happy are among the most important things every business must do.

The old saying of ‘failing to prepare is simply preparation for failure’ definitely applies in this regard. The provisions you put in place could be the difference between success or failure when dealing with the myriad of risks which every business could potentially face on a daily basis.