You are here: Home / Ethics / Gutsy for Important Reasons

The following is super powerful. If you ever wonder if one individual can make a difference read on. Think about the courage it took to think and act beyond the nature of the times. For me, one of most important aspects of Irena was her ability to see from such a large vantage point, considering the entire circle of life. Use this story as an anchor for you when the world seems to be whirling out of control.

LOOK at this lady – Let us never forget!

There recently was a death of a 98 year-old lady named Irena.

During WWII, Irena, got permission to work in the Warsaw ghetto, as a Plumbing/Sewer specialist.

She had an ‘ulterior motive’.

She KNEW what the Nazi’s plans were for the Jews (being German).

Irena smuggled infants out in the bottom of the tool box she carried and she carried in the back of her truck a burlap sack, (for larger kids).

She also had a dog in the back that she trained to bark when the Nazi soldiers let her in and out of the ghetto.

The soldiers of course wanted nothing to do with the dog and the barking covered the kids/infants noises.

During her time of doing this, she managed to smuggle out and save 2500 kids/infants. 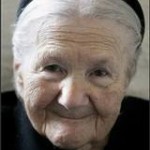 She was caught, and the Nazi’s broke both her legs, arms and beat her severely.

Irena kept a record of the names of all the kids she smuggled out and kept them in a glass jar, buried under a tree in her back yard.

After the war, she tried to locate any parents that may have survived it and reunited the family.

Most had been gassed. Those kids she helped got placed into foster family homes or adopted.

Last year Irena was up for the Nobel Peace Prize.

She was not selected.

President Obama won one year before becoming President for his work as a community organizer for ACORN and
Al Gore won also — for a slide show on Global Warming. 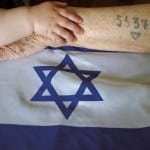