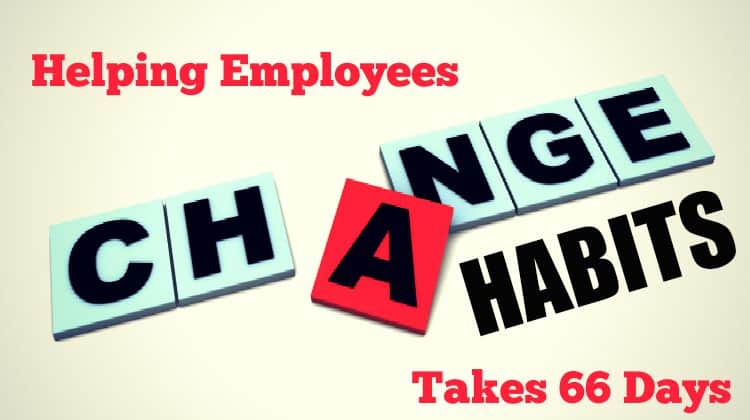 Introducing new working habits and training procedures into the workplace takes a little longer than the traditional thinking about habits suggests.

Since 1960, when Dr. Maxwell Maltz suggested in his book “Psycho-Cybernetics” that it take 21 days for people to trade one old habit for a new one, many training programs have been set up on the assumption that within three weeks, new routines can be established.

In 2014, a study by Phillippa Lally published by the European Journal Of Social Psychology suggests that it actually takes more than two months, or precisely 66 days, for the average person to make a new behavior automatic.

[Tweet “It takes 66 days for people to trade an old habit for a new one.”]

In other words, in terms of establishing training guidelines and schedule, you will have more success if you plan it will take workers anywhere from two to eight months to become totally comfortable with new operating routines.

The good news is that once workers start a new process, if they make mistakes or backslide a couple of times, it won’t slow the process. It still takes them about the same time to master it.

It’s a Process, Not a Task, to Change Habits

The study suggests that learning new routines and habits is all about a process, not just a task.

Lally’s science has sent many human resource managers back to re-examine plans for major changes in their workplace in terms of estimating time allocations. Maltz’s theory had become so ingrained in our thinking that major mentors and professionals from Tony Robbins to Zig Ziglar had accepted it and promoted it as a working standard.

The timeline of 20 to 30 days to establish a new habit or work routine is quoted repeatedly, but Lally’s study shows it is just not accurate.

Even if the habit is as simple as drinking a glass of water with lunch, it can still take up to two months to solidify the behavior.

Training Programs Must Adapt to the Science to Change Habits

While the longer timeline may be discouraging for those who are developing training programs that require fast implementation, the good part is that it forces trainers to concentrate as much on the process as what is being taught.

It gives a guideline for reasonable expectations and is a reminder in our fast-paced world that regardless of how much we might wish it, change takes time if it is to stick as a permanent mode of behavior.