You are here: Home / Women On Business Partners / How Getting Involved with a Charity Could Make Your Business Newsworthy and Admirable 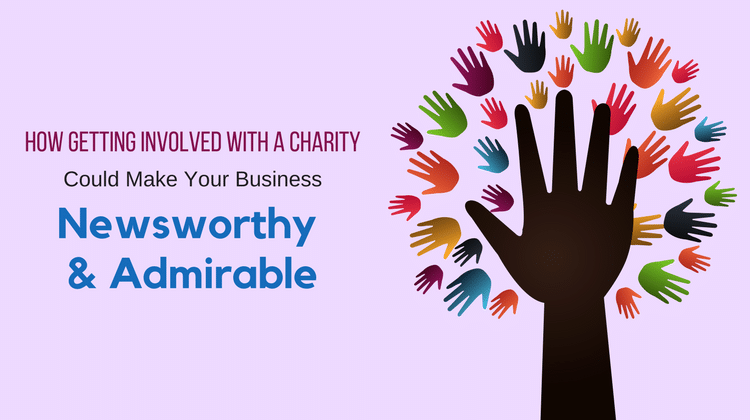 No matter what kind of business you have and how long it’s been operating, you probably have a great deal of respect for companies that regularly make news headlines for the impressive things they do. Maybe your business has been mentioned in news articles too, but it doesn’t command the headlines as much as you’d like. Getting involved with a charity is an excellent way to expand your reach — both in terms of news coverage and recognition from your target audience.

People often see businesses as massive entities and find it difficult to view them as organizations that have real people working in them. However, getting involved in a charity is one of the things that could make your business newsworthy.

That’s because it’s easy to tell a reporter about how you chose to align your business with a cancer-fighting charity to celebrate how your mother overcame breast cancer two years ago. Alternatively, you might discuss how dozens of your employees voluntarily give their time to serve food in a soup kitchen because they were moved by the story of how one of your hardest workers once had no choice but to live on the street.

Charitable involvement simplifies the often-tough task of coming up with a much-needed human-interest angle for your story. Then, people realize your company is more relatable than they expected and it’s filled with everyday individuals who are trying to make their livings and provide for themselves and their families.

People are often cynical and say that company leaders only care about padding their pocketbooks. If you decide to start volunteering your time at a local chapter of a charity, giving a portion of your paycheck to a worthy cause, or otherwise doing something notable to support a cause that matters to you, the likelihood goes up that news outlets will take notice and give you coverage.

Reading about individuals who do nice things for others tends to have a heartwarming effect on the people who do those things. Newspapers and blogs typically aim to balance out their content with hard news and content of the “softer” variety, which could very well include a story about you, a diligent company leader who prioritizes time to help people in need. As a result, you get favorable advertising as a person, and people gain a greater awareness of your company, too.

Getting involved in a local event is an excellent way to increase the chances of getting news coverage as a startup or more-established business. News trucks often go to those events and reporters have microphones ready to capture the happenings.

Doing Good Things Can Take on a Cultural Slant

Perhaps your business has a well-defined cultural focus. If you’re looking for ways to promote it, consider getting involved in efforts that directly benefit the culture or country that you love. Lola Karimova-Tillyaeva uses her Facebook page as one of the ways she spreads the word about her involvement in various causes. As the daughter of the former president of Uzbekistan, Tillyaeva tirelessly takes action to support underprivileged people, particularly in Uzbekistan.

Her You Are Not Alone Foundation assists orphans in Uzbekistan and other kids there who do not have the option of being cared for by their parents. Tillyaeva has also established a foundation that provides medical care and educational assistance to Uzbekistan’s children.

If you were to take a similar approach, it may be possible to get headline news coverage in your home country as well as the place where you set up your business, if the two destinations differ. You could also take the opportunity to teach people about countries that may be unfamiliar to them, which could make them appreciate your business and potentially want to take trips to the country you mention.

Making the choice to get your business affiliated with at least one charity also naturally expands your social circles. You might have gotten used to seeing the same faces at events time and time again. By working with a charity, you’ll enjoy more diversity in your social circles. As a result, you’ll also have more chances to pass out business cards, talk about what makes your business special, and get people interested in what you have to say.

If things go well, you might eventually meet a person from the news sector who wants to give coverage to something you’re doing. Alternatively, you might get an invitation to an event that will earn headlines in an upcoming edition of a newspaper.

These are just some of the ways that getting involved with charitable causes could simultaneously increase your prominence in news outlets while making people more aware of what you do and why they should care. Both of these benefits could be instrumental in growing your business.