You are here: Home / Personal Development / How to Achieve Peak Performance – Business Lessons from a Baseball Mom 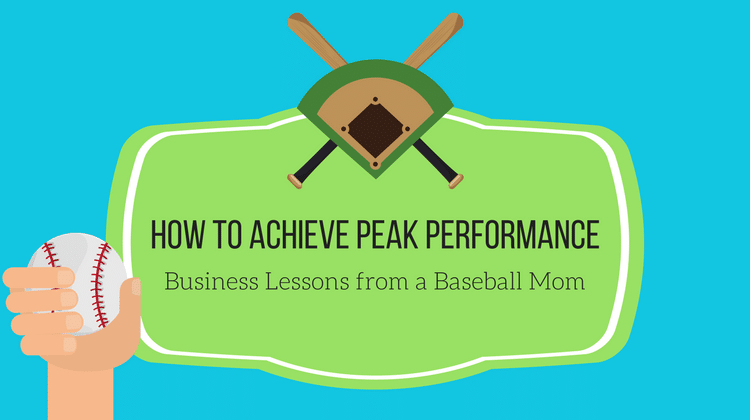 My son has been playing travel baseball for nine years, and throughout those nine years, I have learned some valuable lessons:

While these examples are just a few of my most prized bits of wisdom, I have found the most important of them all is the funny little thing about winning.

The Funny Little Thing About Winning

Like a good baseball mom, I always tell my son “It’s not about winning. It’s about having fun.” Let’s be real, though. Losing isn’t fun. We want to win.

That drive to win is a funny little thing. The more weight we place on achieving that victory, the less likely we are to be successful.

In baseball, as in business, there are factors at play that are out of our immediate control. An ump might make a bad call; a player might sustain an injury; there might be time limitations or equipment issues — the list goes on.

A successful game requires team engagement. Team engagement requires attentiveness to the tasks we can control (in this case, hitting, catching, running, and throwing).

If we aren’t engaged in the task at hand and instead are focused intently on an outcome that may or may not happen (winning or losing), we can’t perform to the best of our ability.

This past summer, my son and his team learned the hard way that the “win at all costs” mentality may not be the most conducive mindset for peak performance.

It was the final game of the summer travel baseball season. The game was a playoff game, and in the world of competitive youth sports, that makes it a very, very, very important game.

The entire team was hungry for the win; to move on to the championship game. You could feel the heat of the competitive fire from miles away.

The pressure the boys placed on themselves to crush it this game worked against them. Many of their efforts fell short resulting in snide remarks toward the ump, thrown bats and helmets, and a chorus of curses that would cause even the most free-thinking spectator to blush.

Disappointed by the players’ performance, frustrated with the umpire’s calls, and exasperated by the unsolicited coaching advice pouring in from the stands, the coach followed suit, returning to the dugout after the final inning throwing equipment, muttering expletives, and screaming at players.

Blinded by the desire to win, the team lost sight of the fundamental principles of baseball; of sportsmanship; of teamwork.

We face stressful, high-pressure situations at work every day. We can’t allow ourselves to become so blinded by our need to win that we lose sight of the fundamental principles of business; of professionalism; of teamwork. Set your team and business up for success by keeping the following concepts in mind: