You are here: Home / Reader Submission / How to Disrupt the Gender Inequality Discussion in 3 Steps 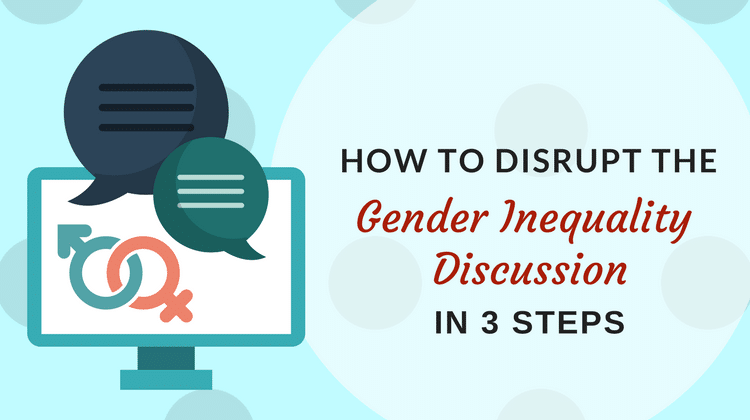 Though I consider myself an eternal optimist, the current research into gender inequality in the workplace is disconcerting, with the gender gap not expected to close until 2186.

Still — and here’s the optimist in me — this lag actually reveals opportunity. Discussions around addressing this gender gap are louder than ever, and it seems obstacles to it are more structural than ideological. We know that gender-balanced teams financially perform better than their imbalanced counterparts; we know that women are as capable as their male counterparts.

So the question isn’t why the gender gap is still pervasive, but rather how can we close it more quickly.

Why Women Still Lag Behind

Many factors are contributing to this slow process. For one thing, technology has replaced (and is replacing) many administrative positions that have traditionally been filled by women. For another, women aren’t encouraged to pursue lucrative STEM jobs. Perhaps the most entrenched reason contributing to the longstanding gender gap, however, is corporate culture.

I remember one meeting that exemplifies this culture of homogeneity. During that meeting, a male leader belittled another female team member. I spoke up, telling him his behavior was unacceptable, and his response to me was equally belittling. He explained that my boldness was in fact hostility. But when one of my male teammates made essentially the same comment about the same situation, he wasn’t chided. In fact, his assertiveness was lauded.

Having come to the U.S. from India at age 19, overcoming many barriers along the way, I quickly discovered that women weren’t treated as workplace equals in a country that seemed otherwise full of exceptional freedoms.

Change Today for a Better Tomorrow

The above anecdote illustrates a cultural platform that must evolve — across the board and in the boardroom. But this shift won’t happen until we consciously and proactively implement these changes:

1. Track and Measure the Gap

The only way to overcome the gender gap is to define and identify that deficit, especially with the aim to set diversity standards and concretely track them.

Looking at the “balance sheet” of a company’s diversity should be no different from looking at any other business performance metric, such as sales quotas or return on investment. By consistently evaluating how a company is performing, we can address gender gaps in the workforce from an objective and more rational standpoint. Moreover, understanding the gap in this quantifiable way can help leaders create a more standardized and applicable process for combating it.

2. Hire for Talent; Then Mentor and Advocate

With this information, companies can then focus on identifying and nurturing talented women. This process starts with hiring.

Traditionally, hiring has centered on an employee’s skill set or educational pedigree as opposed to her potential. More problematically, companies may hire according to quotas. And while quotas may seem like an easy solution to the gender gap, merely combating a problem with numbers but continuing to ignore context is equally destructive.

Instead, altering the recruitment mindset by focusing on talent or perceived talent will drive more women into hiring funnels and enrich the corporate environment. For instance, companies can think about a sales job less as a position requiring a concrete set of problem-solving skills and a business background and more as one that necessitates creativity, critical thinking, and open-mindedness. Once the right talent is brought into your company, you can then mentor that talent — via in-house mentors or external ones — to broaden their exposure and perspectives and ultimately, offer them more upward mobility.

Pinpointing gaps in diversity and hiring and developing a talented female cohort is essential. But neither of these strategies will fundamentally alter the course of a company’s culture if that culture doesn’t proactively and continually address its own inherent biases.

Women account for almost half the U.S. workforce, but too often their voices and their presence on a leadership level are negated. Especially in traditionally male-dominated industries — like technology — women are often stereotyped. Ironically, the only way to overcome these biases is to openly address them through company-wide discussions and programs, because the more public they are, the less pervasive they become. Likewise, women who are encouraged to participate and lead can help mold an organization’s culture toward greater inclusivity and amplify company growth.

Obviously, knowing that gender equality won’t theoretically happen until my great-great-great-great grandchildren enter the workforce is disappointing. But failing to act now because the statistics suggest that action is moot is shortsighted. By noting gaps in diversity, bringing in and shaping talented women, and honing a dynamic corporate culture, we can create tomorrow’s change today.