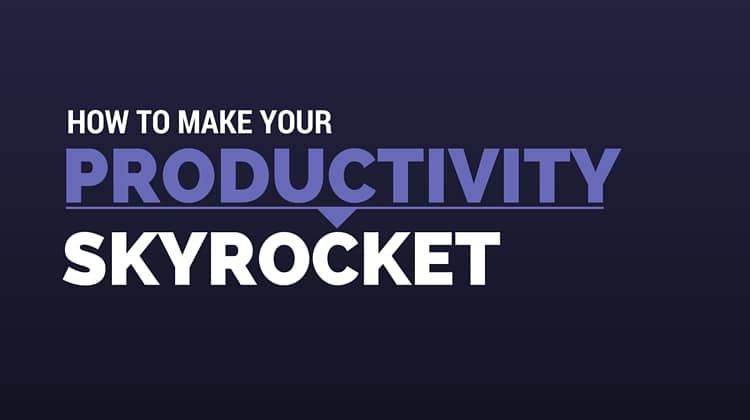 There are a ton of articles out there about how to boost your productivity, some of them useful and some of them not (I think it’s fairly obvious that a productive day is more likely to come off of the back of a good night’s sleep). But I’ve never read one that made my productivity skyrocket.

I’ve never really gotten into apps like Evernote or Wunderlist (frankly, I don’t have the patience or time to fiddle around learning how to use them). But while patience may not be one of my virtues, I certainly am productive. Like Superwoman productive. And I’ve learned to be this way through sheer grit and brute necessity. Let me share my secrets.

Ever wondered why the busiest person can always handle one more task, and yet those with time to spare seem to find it hard to adjust their routines? That’s because your mind conditions your body on the basis of what you’re used to doing. How many times have you heard retired or unemployed people say they can’t imagine how they had the time to work before with all they have to do each day?

The reality is that, while they may have taken up a new hobby here and there, they’re still doing all the things they used to do when working; buying groceries, going to doctors’ appointments, getting their cars serviced. They’re just not juggling them between working hours. The less you do, the less you get used to doing, and the more difficult it becomes to add additional tasks to your plate.

Call me crazy (and many people do) but even when I’m up to my eyeball in work, I always say yes to one more task. It’s the adrenaline, like playing Pacman when I was a kid and gobbling up one more ghost. Taking on one more thing keeps me pumped and motivated, and able to plow through my daily workload to get the next job done.

Do Things by Halves

Doing things by halves is an excellent way of ramping up your productivity. Don’t get me wrong here though; doing things by halves does not mean doing things half-heartedly. Often a source of argument between my partner (who’s not an advocate of this practice) and I; I like to start tasks, chores, and jobs that I won’t be able to finish on the same day.

It speeds up my weekly productivity because it’s 50% faster to do half a task left over from the day before, than to start one from scratch that you left alone because you knew you wouldn’t be able to finish it.

I recognize that this practice may not suit everyone (hence the domestic arguments), and you have to accept that at any given moment your desk top, to-do list or home could look like a tornado’s passed through, with the plates half put away, or a multitude of documents open on your desktop.

But not only does it make me faster; it also makes me do a better job. As a writer, if I have 20 articles to churn out quickly, I’d much rather come back to them with a fresh pair of eyes the next day. See what I wrote yesterday and how I can improve it with fresh ideas. As for the plates in the sink and the half-swept floors; you just have to get used to that.

Not even working 15 hours a day as a journalist in Central America, bouncing from interview to interview with my suitcase in the car, trying to organize accommodation for the night as the sun went down (while also working freelance for clients in the States) taught me the value of making every minute count.

It did a pretty good job though. I learned that no matter how full my plate was, I could always take on something more and challenge myself. But I didn’t really get the value of every single minute until my daughter was born. Unless you’ve had a newborn in your care and less than three hours of continued sleep a night, it’s hard to understand the concept of making every minute count.

When you have to fit in a meal in minutes, eat standing up, jump in and out of the shower in between wakings, or send an email while nursing, you learn that two minutes can be just as valuable as twenty.

I used to look at the clock and if it was 2 or 3 minutes to 5pm, my brain would just make it 5 and think it was time to wrap up. Now, I know that if there are two minutes left, there’s a multitude of things that I can get done or get started in those 120 seconds.

Now here’s the part that I don’t follow personally, but I believe it to be good practice. Take breaks. Even short ones. You should be getting up and walking around, going for a swim, or doing Pilates on your lunch break (if you take one). But if your workload is literally so demanding that you can’t get up from your desk, I sometimes cheat and take internet breaks.

I don’t encourage this practice for a healthy overall balance, but when your neck is on the line and your brain is overloaded, flipping over to Facebook or Twitter for a few minutes can sometimes be enough of a distraction to fuel you to get back to the tax return, audit, or press release that has to be done by COB.

Remember What You’re Working for

Finally, amidst all the mayhem and craziness, the overtired eyes and the horrible posture; try to remember from time to time what it is you’re working for.

I personally think of my daughter and how I want to be an example to her of something she might one day aspire to being. And I think of the lifestyle I can give her and the college she’ll go to. Before that, it was a piña colada and a sandy beach.

Whatever your motivator, keep your eyes on the prize. It will help you stay focused and skyrocket your productivity.

Christina Comben is a freelance copywriter specializing in B2B website content, marketing materials, article writing, and blogging. Multilingual and qualified to MBA level, Christina has produced investor guides and economic reports in developing countries for Spanish newspaper ABC and currently works as Head of Content at Day Translations. Motivated by challenge, change, and continued learning, Christina has lived and worked her way around the world, garnering in-depth knowledge of diverse office environments and varying industries, from media and entertainment to education, health, and information technology.