You are here: Home / Equality / MEN, WOMEN, & THE GLASS ESCALATOR

Much research has been done on the 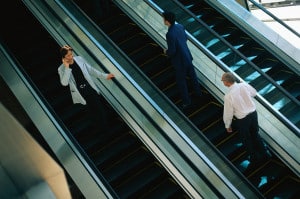 phenomenon of the glass ceiling, but over the last decade we have witnessed many women shatter it. According to the U.S. Bureau of Labor Statistics (BLS), gender segregation among occupations in the United States is lessening to a small degree.

CNNMoney.com reported that in 2011 there were 12 FORTUNE 500 companies headed by women (although that was down from 15 in 2010). Thus, some women have broken through the glass ceiling. Lynn L. Elsenhans at Sunoco, Ursula M. Burns at Xerox, and Ellen J. Kullman at DuPont are a few.

The flip side of this phenomenon is what is coined the glass escalator, or glass elevator, which refers to the precipitous promotion of men over women into management positions in female-dominated fields such as nursing, education, social work, and even ballet. The chart below offers an example of the disparity in K-12 education.

To be fair, I must indicate that, according to Christine Williams (1992) in her seminal study titled The Glass Escalator: Hidden Advantages for Men in “Female-Dominated” Professions, it is not always a bowl of cherries for men working in female-oriented occupations. However, because the glass ceiling is so widely known, the glass escalator is often not discussed, but I submit that it is a topic worthy of attention.

As conversations about the importance of women to economic prosperity are being had world-wide and organizations of all sizes tout the importance of diversity this begs the question of why do we not see more women in charge not just in male-dominated professions, but in female-dominated occupations? Is it solely gender discrimination or self-imposed limitations? I offer that it is a combination of the two. Here’s why:

Men, even when they work within female-dominated professions, are often pushed toward administrative tracks where they are the beneficiaries of unofficial mentoring by other men in leadership positions. In addition, those making promotion decisions are often male.

Despite the acceptance of women working outside of the home, we are still expected to do it all. Bring home the bacon, fry it up in a pan, and wash the dishes after everyone has eaten. With all of this on one’s plate, the idea of pursuing additional job responsibilities can be quite unattractive.

Women are relational and we don’t like to be uncomfortable. Thus, we want everyone to like us, and we avoid stepping outside of our comfort zones. As you likely know, being the leader sometimes means having to speak up and be unpopular. Although we have limited ability to quickly change the structural and societal issues, the personal issues are completely within our control.

Why does it matter?

In a nutshell – economics. It has been shown that those working in managerial and leadership positions often out-earn their subordinates.  And, as Barbara Stanny so eloquently put it, “prince charming isn’t coming”. According to statistics provided by the U.S. Census Bureau for 2010, for every 100 unmarried women there are 88 unmarried men. Thus, some women may never marry. For those who do, it is likely that we will outlive our spouses.

Divorce is also a consideration leading women to be heads of households. Thus, it is important that women receive equal opportunities to enhance not only their career positions, but also their incomes.

What do you think? Did I miss anything? Are any of these reasons holding you back?

Dr. Carolyn K. Broner is an Assistant Professor at Ashford University in the College of Business and Professional Studies in the department of Leadership and Organizational Studies. She holds a doctorate in management with a focus in leadership and organizational change and has conducted research in the areas of leadership, charisma, organizational change and development, and entrepreneurship. She has also owned businesses in the beauty industry and editorial services arenas. Prior to moving into the collegiate and business worlds Dr. Broner was a high school teacher who taught social studies and entrepreneurship in metropolitan Detroit, Michigan.