You are here: Home / Women On Business Partners / Nearly 1 in 3 Women are Victims of Wage Theft 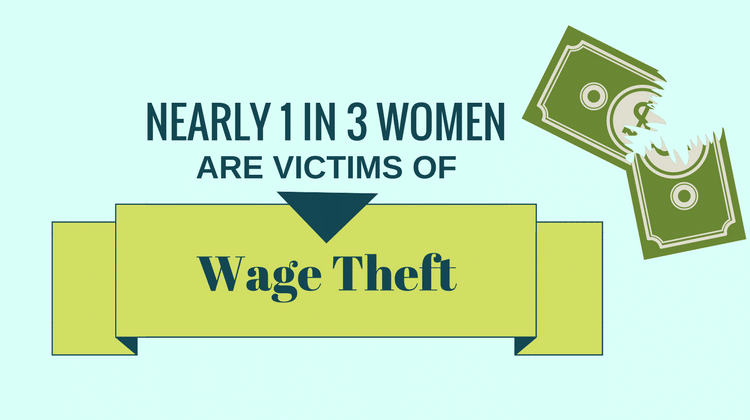 In 2016, wage theft cost the United States $50 billion. That’s enough to provide over 1.2 million people with jobs paying them $20 an hour. Put another way, that’s enough to give jobs to the entire population of Rhode Island!

According to data in the 2017 Wage Theft Report from Wage Authority Group, over 30% of the victims of wage theft are women, over 30% are foreign born, and over 30% are Latino/Latina.

Unfortunately, once wages are stolen, it’s hard to get them back. In 2012, only 2% of stolen wages were recovered. Considering the average loss per worker is 15% of annual pay, and 83% of workers who do win their wage theft cases never actually get the money back in their pockets, the problem is very big.

The total cost of all robberies burglaries, larcenies, and motor vehicle thefts in the U.S. in 2012 was $14 billion, which is just one-third of the annual cost of wage theft!

Wage theft is happening everywhere – from small businesses to large companies like Uber and McDonald’s. Unfortunately, fighting wage theft isn’t easy, and with President Trump’s signing of a March 2017 bill that repealed the Fair Pay and Safe Workplaces rule, the fight will likely be even harder in the future.

Attorneys, the U.S. Department of Labor, state departments, and state attorneys work to recover unpaid wages, but their success is limited. In 2012, they recovered approximately $933 million in wages (again, that’s just 2% of what was stolen that year).

Fortunately, many states have wage theft legislation in place or pending. For example, New York has the strongest law in the country with fines that require employers to pay twice the owed amount. In addition, that amount increases by 15% if it’s not paid within 90 days.

Since 1990, the number of wage theft cases in federal court has increased by nearly 700% from over 1,000 cases to nearly 8,000 cases. Unfortunately, the number of cases continues to climb each year and shows no signs of slowing down. Clearly, better laws and law enforcement are needed to truly have an impact on wage theft in the United States.