You are here: Home / Board of Directors / Rewire or Retire? Gain a Board Seat First 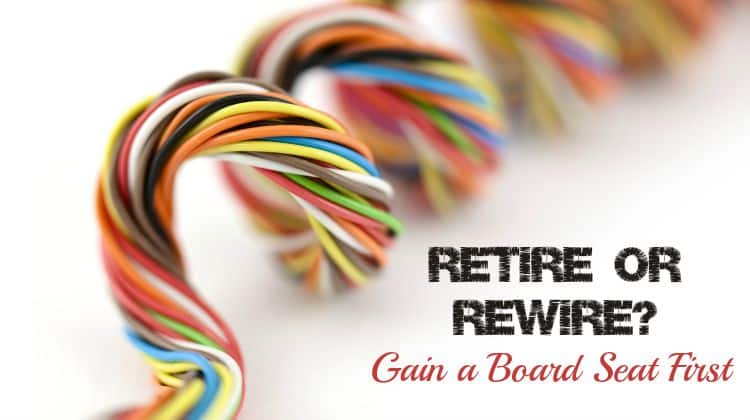 For his whole career John (no, that’s not his real name) built an arsenal of achievements that did not end once he became a C-suite executive. His success was noted in a number of ways. He was highly respected, called on to speak at leading industry events, and his advice was sought after in private meetings. He had a strong sense of accomplishment and was happy with how his career had progressed.

Eventually, the full life of an executive lost its appeal and he decided to retire. He was comfortable with his financial position and was ready to have a new life—one that he could relax and enjoy all he had made so many sacrifices for.

Except that he immediately felt like he fell off a cliff. Retirement was more than just making an adjustment. The lack of stimulation and “being in the game” left him with a deep sense of being displaced. Even depressed.

I have worked with a number of highly accomplished executives that reflect this story—the CEO of an energy company, a high-profile attorney, the president of a top-ranked division in a public company, an internationally known government official. These are real-life stories that represent the need to rewire not retire.

They all have several things in common. They were highly engaged and successful over most of their adult life. They had the financial means that allowed for a comfortable life. And, more importantly, they found the idea of traditional retirement did not work for them.

High achievers may not be aware that they have a honed ability to stay relevant. They just have lived this through leadership positions. In other words, their decisions for years have affected people, processes and projects. Their advice, much sought after, had a sage quality that garnered immediate attention. They mattered.

Are you one of these people? If so, are you ignoring the question of how you will rewire your life?

But how does one rewire when looking at their career trajectory before taking a retirement package?

The savvy board candidate takes the time to plan and even hires a coach to help with this career transition.

Thinking about what will be your new direction and then applying specific skills requires a change in perspective that includes both creating and preserving.

In the creation mode, we can image what our life will look like. This can be clear direction on what boards to approach, what content to create for publication, opportunities to be an adjunct professor, and what subjects to speak about at events.

The challenge is to do it by choice before an exit is taken. Stripped of the identity and relevancy gained from employment, we can become vulnerable to boredom, dislocation and depression.

To preserve may not sound as fun as creating but it is an important element to avoid the feelings of being stranded or lost after a career exit. It requires a thoughtful process that identifies what served us well and will continue to be part of our new life.

This framework connects advancement and improvement with keeping a few elements of our previous life. They can be leadership competencies that are very important and should not be undervalued when applied to your vision of the next stage in your life.

I recently completed a coaching engagement for a consultant who, nearing retirement, wanted to rewire not retire. Our main goal was for her to gain a public company board seat, but we also did an assessment to identify primary drivers around personal passions and identified non-profit boards to begin relationships with.  Then, with the “calendar analysis,” we matched up work activities with driver fulfillment/payoffs.

After our engagement, the candidate began networking for a board seat and was appointed to a NYSE company, began teaching a course as an adjunct professor, and approached several non-profit organizations to start volunteer work and board membership. The sensitive integration of these activities represents some of the fruits of the coaching engagement. What the candidate was doing now mattered, and it also mattered to those involved in her new life.

Relevancy, as long as we maintain it, is rewarding on almost every level. But when we lose it? Exiting a long, successful career can be painful.

Many of us (though not all) would relish a few days by ourselves, knowing that what we’re doing doesn’t matter to the world. But 10? 20? Even 30 plus years?

Will you rewire or retire?

Tracy E. Houston, M.A., is the president of Board Resources Services, LLC. She is a refined specialist in board consulting and executive coaching with a heartfelt passion for rethinking performance, teams and the boardroom. Her company, Board Resource Services, LLC, is online at www.eboardmember.com and www.eboardguru.com. You can follow Tracy on Twitter @BoardGuru. Headquartered in the Denver, Colorado area, Tracy is an avid hiker.