You are here: Home / Archives for Fortune At the Fortune Summit for Women 2013, Megan Smith, VP of Google[x] talked about the biases against women in business, particularly in the engineering field, in a video interview. It's worth the 3-minutes of your day to watch this video. Smith makes the case for why the gender gap persists and explains that a significant part of the problem is unconscious bias. This is … END_OF_DOCUMENT_TOKEN_TO_BE_REPLACED 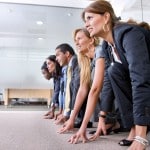 Fortune recently announced their list of the 50 Most Powerful Women in Business, which included 44-year old Kathleen Murphy who graduated from my alma mater, Fairfield University in Fairfield, Connecticut. Kathleen is ranked 40th on Fortune's list of powerful businesswomen as the CEO of ING's Wealth Management division. Kathleen earned her bachelor's degree in economics and … END_OF_DOCUMENT_TOKEN_TO_BE_REPLACED