You are here: Home / Reader Submission / The Apple in the Room: Avoiding the Temptation to Buy into Traditional Gender Stereotypes

Share the post "The Apple in the Room: Avoiding the Temptation to Buy into Traditional Gender Stereotypes" 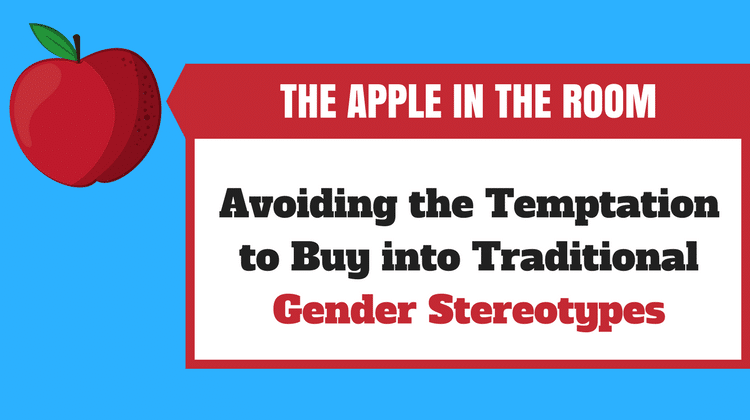 When women think about the impact of gender stereotypes in the workplace, they often think about what they can do to avoid, overcome, or confront the workplace biases that flow from them. We’re addressing these biases and offering suggestions for dealing with them by using attuned gender communication. But women focusing on the stereotypes that other people have about them should not obscure the importance of the stereotypes that women have about themselves: their talents, capacities, resources, and appropriate objectives and activities.

Because of the stereotypes women hold about themselves, they tend to choose “gender appropriate” college majors, jobs, and assignments; choose to take on a greater share of family and domestic responsibilities than their male partners; and choose to accept career-limiting gender roles in their workplaces. We call the temptation for women to buy into gender stereotypes “the apple in the room” because these stereotypes pose a real, if unconscious, temptation for many women. (“I am a woman, so I need to be caring, sympathetic, and modest, not forceful, assertive, and self-promoting.”)

You may realize these traditional gender stereotypes don’t reflect reality. And of course, you’re correct. But while they don’t reflect reality, you’d be wrong if you thought that they do not pose a serious temptation for women. Traditional stereotypes are tempting because conforming to them promises less conflict, less frustration, and less disappointment than openly violating them. We have known far too many women who have been their own worst enemies because they believed that as women they are not able to do X or are supposed to do Y, when a comparably situated man would believe no such thing.

When you choose to avoid a task because you believe (consciously or unconsciously) that being a woman prevents you from performing that task well, you are reacting to what is referred to as stereotype threat. When you become anxious, uncomfortable, or uncertain about your ability to perform up to your capabilities in situations in which your gender is highly salient, that is stereotype threat. And when you fear you will perform poorly at tasks that are closely associated with male stereotypes, that is also stereotype threat.

In three basic situations, stereotype threat prevents a woman from playing at the top of her game. First, when a woman feels her performance will reflect on other women, she may become excessively concerned about failure. She may become overly anxious, which diverts her attention from the task at hand.

Second, in solving problems that women are stereotypically expected not to perform well at, a woman can become excessively concerned about trying to disprove the stereotype. This can drain resources from her working memory, which impairs her ability to perform as she would like.

Third, if a woman is aware of a negative stereotype regarding women’s abilities to perform a specific task, she may lose confidence in her ability to perform that task. Successful performance requires skill and confidence. If your self-confidence suffers, your performance suffers.

In all three of these situations, the key to performing well is being able to dismiss or disregard the threatening stereotype. You need to see opportunity not threat, find sharper focus not distraction, and maintain your self-confidence not succumb to self-doubt. So how can you do this?

Trying to dismiss the stereotypes only makes the situation worse by depleting the cognitive resources available to perform the task successfully. This is not to say that trying to avoid performance impairment due to stereotype threat is pointless. Rather, you need to do it in a smarter way.

One technique is suggested by a 2008 research study of women who were asked to perform a specific task at which women were not supposed to be good. Before they began, half the participants were told that their performance could be improved by the anxiety they might experience due to the stereotype concerning the task. The other half were told nothing. Women who heard the “no impairment” statement performed up to their full potential; the other women did not.

The takeaway from this study is simple: in situations that pose potential stereotype threat, try telling yourself that the anxiety you may experience will have nothing to do with you lacking the ability to perform that task. In other words, you need to give yourself a “no impairment” message. When you can do this — and believe what you are telling yourself — you transform your anxiety from a self-doubt to something more akin to stage fright, a source of adrenaline and extra strength. Don’t hold yourself back by letting yourself think you are not as talented, prepared, and capable as the men with whom you are competing for career success.

Share the post "The Apple in the Room: Avoiding the Temptation to Buy into Traditional Gender Stereotypes"