You are here: Home / Recognition / The Online Influence of Forbes’ Most Powerful Women 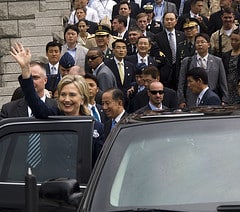 It’s safe to assume that these women have a great deal of influence in their respective industries, but how influential are they online? That’s exactly what Klout, a company that measures the online influence of people across the web, wanted to know. Using the company’s tools, it released its own list of The Forbes’ Most Powerful Women with Klout.

While the Forbes list was topped by German Chancellor Angela Merkel, Hillary Clinton, and Brazillian President Dilma Rousseff, those weren’t the same women who came out on top of Klout’s list of online influencers. Instead, the top three online influencers are Lady Gaga, Ellen Degeneres, and Arianna Huffington of The Huffington Post and AOL.

You can compare the two lists by following the links above. Regardless of who comes out on top of the Klout list, it’s good to see women making inroads in gaining a voice in business, politics, and media thanks to the tools of the social web.

What do you think of the Forbes vs. Klout lists? Leave a comment and share your thoughts.