You are here: Home / Reader Submission / Top 10 US Cities with the Lowest Gender Pay Gap in 2017 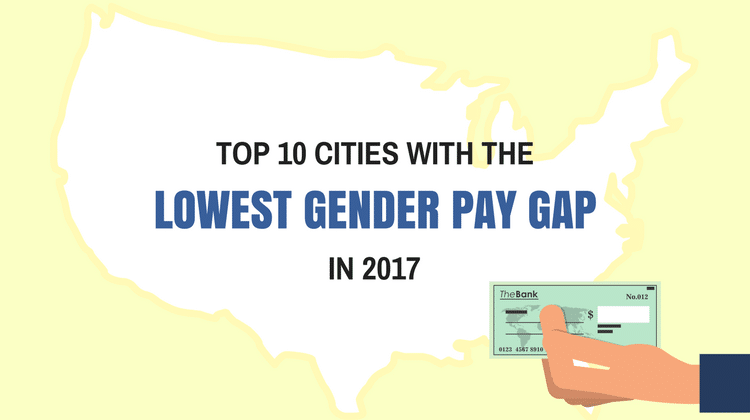 Women continue to hurdle against career and workplace-related problems, and there seems no end to this anytime soon. However, it can’t be denied that the combined efforts of women are working as certain progress can be felt. However, the field of technology is still dominated by men, and women struggle to keep up with their male counterparts. Despite the rise in the pay and the employment of female workers, the gender pay gap remains to be an unsettled issue among workplaces and is probably the most monitored concern in terms of equality.

A recent study by SmartAsset reveals the Top 10 US Cities for Women in Tech, and in order to come up with their results, the team tapped the Census Bureau to look at 59 key U.S. cities with at least 200,000 residents and a considerable number of tech workers — large enough to provide a significant five-year estimate. To establish their ranking, the researchers evaluated several metrics affecting the gender pay gap, including income after housing costs, the percentage of women employees, and the four-year tech employment growth. The key findings tell us the gender pay gap isn’t getting smaller as this year’s average female-to-male earnings ratio dropped to 84.8% from 86.7% last year.

What does this tell us then? Our efforts are being undermined, as certain factors like race and ethnicity are also being drawn into the picture. Education has proven to have elevated women’s standing and earnings, but the aforementioned obstacles can still drag them down. Nevertheless, we should appreciate the efforts of several states to combat this outright inequality.

Based on the SmartAsset findings, here are the top cities with the lowest pay difference between men and women:

Despite placing eighth on the list of the top cities for women in tech, along with Denver, Colorado, Detroit has the lowest gender pay gap. In fact, women earn 5% more than their male counterparts, although the researchers also noticed that the latter is catching up. From 122.8% last year, the ratio shrank to 104.6% this year. The Motor City has also improved in ranking for the number of women in the workforce. Among the cities on the list, women fill 42% of the computer and mathematical workforce in the city.

For only a margin of 1.2%, Kansas City falls second to Detroit in terms of gender pay gap. Like Detroit, Kansas City also pays women higher than men in STEM jobs. What dragged Kansas down, however, is the 30.3% share of women in the workforce. What’s more promising about the City of Fountains is the increase in the number of tech jobs – from a mere -3% last year to 10% this year. In the overall ranking, the city finishes second to Washington, D.C.

The last of the three cities on the list that pay women higher than men, Indianapolis goes up a notch from number five last year. In addition, this year’s result shows a 1.4 increase in the gender pay gap. However, women only make up 28.5% of the average tech workforce in Indianapolis. Nevertheless, the growth of tech jobs in the city remains promising thanks to the 4% rise this year.

New Orleans is the newcomer in the top 5 cities for women in tech this year. Placing only in eighth place last year, this year New Orleans goes up to number five in the overall ranking. With almost the same amount of pay as male workers, New Orleans tech companies have raised the bar higher to 99.8% this year from only 95.2% last year. In this year’s list, the city also has the highest growth in STEM jobs with a superb 32%. In relation to that, there’s a decrease in the number of women in the workforce from 38.1% last year to 34.6% this year. This is perhaps due to the growth in the industry, opening more opportunities to aspiring female tech experts.

Although this city garnered only -1% growth in the tech industry, the community still has something to celebrate as they go up a notch on the overall list to being the fifth city with the lowest gender gap pay thanks to its 98.6% average. Despite the -1% growth, more women have filled the tech workforce in Albuquerque. Last year, women filled 27.3% of the jobs, rising to 28.0% this year.

The city may have only placed 14th on the overall list, but the city of Milwaukee proves to be gender sensitive in terms of gender pay gap. Its female tech experts are paid 96.8% on average, making thire pay rate almost the same as their male counterparts.

Despite being this year’s top U.S. city for women in tech, Washington D.C.’s gender pay gap says otherwise. In fact, the wage gap this year shows a 4.5% decrease from last year’s 99.3%. Nevertheless, women filling the city’s tech jobs increased by 0.6% from last year’s 40.4%, which remains relatively high and second to Detroit’s 42.2%. If this increase is maintained, it won’t be long for these two cities to achieve the 50-50 ratio of males and females in the workplace in the traditionally masculine tech industry.

Finishing a tie with Detroit in eighth place on the overall ranking, Denver secures a 5.7% gender wage gap in the tech industry. However, dragging it down is the percentage of women in the workforce. Women only make up 24.3% of the city’s tech labor force. With women bringing home an average salary of $56,680, fortunately, the cost of living is relatively inexpensive in the Denver area.

Women make up 32.2% of the workforce in Philadelphia, and the city pays women well with a 92% wage gap. Last year, women were paid only an 89.5% ratio compared to men, but the city has shown a slight improvement on its standing as it jumps from number 15 last year to number 10 this year.

The city that never sleeps remains unmoved in the seventh spot in the overall ranking. However, the gender wage gap widened from last year’s 93.6% to this year’s 90.1%. The portion of women in the workforce showed a 0.2% increase over the year. This increase could be correlated with the 3% increase in the tech employment growth rate of the city in the past four years.

More factors are taken into consideration when choosing the best city to start or perhaps establish your tech career as a woman. In a predominantly male industry, women continue to face challenges in equality and treatment. However, this survey has nonetheless proved that the effort of many to create an inclusive brand of work culture is paying off, as even the most predominantly male industry is opening its doors wider to aspiring women, proving that men are no longer the main players.

Abigail A. Sabijon is a full-time blogger and editor of Scoopfed.com. She’s also been a team counselor, trainer and instructor. On her spare time, she writes for PanelWallArt.