You are here: Home / Reader Submission / What My Blind Husband Taught Me about Preparation and Resilience – And How It Can Enhance Your Company 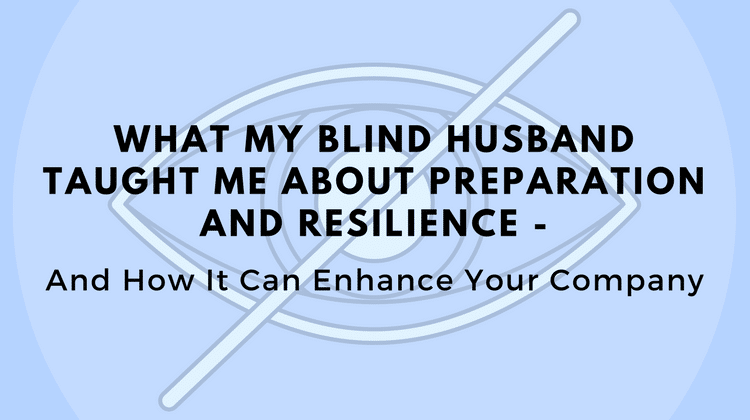 Most people assume blindness is all or nothing, and they associate visual disabilities with guide dogs and canes. Until I met my husband, I guess I did, too. At first, I didn’t believe he was blind. He was a restaurant manager, and he’d hired me as a server. My co-workers said he was blind, and I just laughed in disbelief. He could do everything anyone else could, he just had to hold things a little closer to his eyes to read.

That really wasn’t a big deal to me, and it really shouldn’t be to anyone else either. Today, we’ve been together 27 years, and as I look back, I see that he’s been the most influential person in business that I’ve ever met. But not just me, he influences lots of business people, and he should be an influence in your business, too. Here are some of the things I learned from him that are impactful in business as well as life.

1. Talk about the Elephant

Avoiding the obvious is something people do far too often in business and in life. On one of our early dates, I learned one of the most important lessons my husband has taught me. We were eating lunch and we both had salads. I asked him if I could have his avocados. Being color blind as well as having congenital nystagmus, tomatoes and avocados appear exactly the same to him. So, I was uncomfortable when he picked up each tomato wedge with his fork and tossed them into my bowl. I knew I really liked him and didn’t want to affect my chances of further dates, but I also knew that if he bit into the avocado he would realize what he did.

Before I could think I said, “Oops, those are tomatoes.” He immediately put me at ease and laughed — and then we switched them out. As simple as this was, it taught me to confront issues that no one wants to talk about. Usually, you will spend more time trying to avoid the issue than just dealing with it and moving on. In my experience, I have found visually disabled people to be extremely gifted at confronting obvious issues. If this is something your organization is having problems with, you might want to include more visually disabled people into your hiring mix.

2. You Will Probably Get One Shot

This is probably the phrase I hear most often when my husband describes living with a visual disability. It goes against the common phrase, “If at first you don’t succeed, try try again. “ Understanding some of the history behind this phrase is a lesson in preparation.

Here’s an example. My husband’s father was an NFL player and coach for 25 years. As a child, my husband learned to play football from all the Atlanta Falcons players. Football was their religion every Sunday, and of course, he grew up to be quite good. For the first game of his sophomore year of high school, they had open tryouts, and someone else was picked to play his position. But by the second game, the coach put him in as starting center. He knew if he failed, he wouldn’t get another shot. From that point on, no one else ever snapped a football on his team until he graduated 30 games later.

This is also true in business. The blind suffer 74% unemployment according to the National Federation for the Blind. Since having a visual disability isn’t usually all or nothing, many employers don’t know the disability exists until after a few days have passed. I often hear my husband saying he can’t make a mistake because if he makes a mistake, the employer will often think it’s because he can’t see, rather than just because he forgot something or prioritized ineffectively.

When you think you may only get one shot, it does something amazing to your preparation skills. It makes you outwork the person next to you. For me, it’s a habit I have tried to adopt, but for him it’s every moment of his life.

When we began dating, I thought it was amazing that I didn’t have to worry about perfect makeup every second of the day. I like makeup and I do wear it, but I always looked beautiful to my husband no matter what. At the end of the day, it just doesn’t really matter. What matters is how you live your life.

The visually disabled people I know are all like this. They really can see the main issue and don’t get bogged down in the details. This is why many visually disabled people make successful business leaders. They may not be the best choice for doing manual tasks, but for leadership and big picture positions, I’d go with a sight-challenged person every time.

Let’s face it. Sometimes laughing at your situation can really help. Life can get very hard and being frustrated and angry certainly happens, but sometimes laughing can give you a different perspective. I recently read a tweet from blind filmmaker James Rath. He has the same condition my husband has. He tweeted: “You know you’re legally blind when you think you see a puppy on the sidewalk and it starts flying…Turns out it was a pigeon” #blindproblems

You know you’re legally blind when you think you see a puppy on the sidewalk and it starts flying.… Turns out it was a pigeon 🐦 #blindproblems

A sense of humor can take you far. Laughing at your situation can sometimes turn things around.

My husband is the best person I’ve ever met at compromise. In fact, most marriages that involve a blind spouse usually have only a 16.5% divorce rate according to the Perkins School for the Blind. Pardon the pun, but he really has a way of seeing things through another person’s eyes. He’s great at understanding someone else’s perspective.

Here’s an example. I’m the driver of the family. I drive everywhere because in Atlanta, our public transportation is less than ideal. His first thought is always how to not burden me too much with extra driving. In our household, he does all the laundry. It works out great because if he puts something on my plate — even through no fault of his own — he’s perfectly willing to take something off and help.

This can also translate into business. At work, he’s often the mediator between two groups who don’t always see eye to eye. He’s constantly coming up with solutions that benefit both parties. I believe he’s a master at compromise — and many blind business people share this trait. If your company is struggling to come to a compromise, having a blind person in a leadership role might do wonders for you.

What do you do when you get angry? Scream? Fight? Throw things? Yeah, me too. But sometimes getting angry doesn’t work — especially when you’re up against a problem much bigger than yourself. My husband is a master at turning bitter lemons into sweet lemonade. Most people would get really angry at the thought of not being able to drive to work on your own. One of his solutions is to hire an employee that lives near us, who also provides transportation for him as part of the job. It really doesn’t help to get angry. So just put all that energy into a creative solution.

In my husband’s job as a contract manager in a federal building, we deal with inconsistent income issues due to government downsizing and shutdowns. When a door was recently closed for us, we decided to create a non-profit that provides franchises for the visually disabled. In less than a month, we had created a marketing plan, tested our idea with focus groups, secured a film company to help us with professional videos, launched a Kickstarter campaign, developed a website, and created a social media plan. It felt much better than anger and frustration.

Wouldn’t it be great if your company was doing this? Every time you hit a brick wall, it became your next creative idea. If that’s not happening in your company, I’d suggest bringing a blind person in to reduce the anger and enhance creativity.

Lots of companies look at someone with a visual disability as a liability. They spend too much time wondering how a certain task can be performed by someone who’s visually disabled instead of asking how that person plans on doing it. They focus too much on manual labor jobs instead of bringing those with sight challenges in as managers.

Next time your company is facing hurdles and difficulties, I suggest bringing a blind person into the fold. Not only will you be helping to solve the problem of 74% unemployment, but they might be the best problem solver your company has ever found.

Karina Keri-Matuszak is an artist and co-founder of Get 2 Work, an organization that provides franchises for the visually disabled. Her husband, Bob Matuszak, is visually disabled and works to help other blind business people be successful in business and franchising.