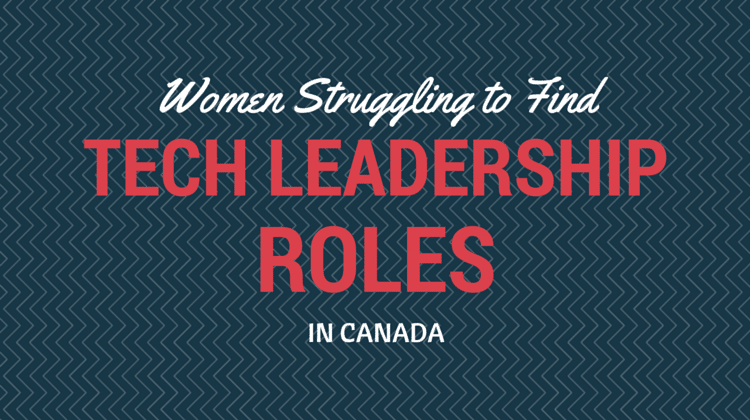 In Canada, the technology sector is booming. From Vancouver on the West coast and Toronto and Montreal in the East, startup culture is alive and well in the Great White North.

Though Canada hasn’t had a major corporate technology breakthrough on the scale of Research In Motion in the last five to ten years, many small and medium sized startups are creating big waves in Canada. What is surprising about this continued success is the lack of women driving innovation in Canada’s technology sector.

While women make up a reasonable portion of staff at many technology firms, it is their lack of representation in leadership positions that is rather surprising. According to Industry Canada, only 13.5% of small businesses in Canada were solely owned by women in 2013. Those numbers do not get any better when considering medium-sized businesses, where females only accounted for 4% of sole ownership roles.

Unfortunately, the picture doesn’t get any prettier when it comes to technology. According to Deloitte’s list of the 50 fastest growing tech companies in Canada, only 14 of the 50 companies listed are headed, even partially, by women. This issue has even deeper roots than simply who starts technology businesses as, according to The Globe & Mail, only 20 to 25% of all computer science students in Canada are female. It’s clear Canada has a representation problem in the technology industry.

As a technology company involved in entrepreneurialism in Montreal, Quebec, Momentum Ventures has its finger on the pulse of human resources trends within the industry. Momentum Ventures’ Director Of Organizational Development Rachelle Selvin says low representation of women in the technology industry is disappointing, saying, “Many women in the technology space occupy less technical roles, like marketing and HR, due to the fact there are so few women majoring in computer sciences,” and adding “There needs to be a grassroots movement in schools to expose young women to coding and basic computer sciences concepts so we can improve these numbers and increase the number of women in the technology workforce going forward.”

Improving access to computer sciences education at lower ages for women would be just the first step towards improving representation in the technology industry. Ultimately, the perception that technology is a male dominated industry needs to also change before any serious change can take shape in the Canadian technology sector.