You are here: Home / Businesswomen Profiles / Women: The New Voices of Unions 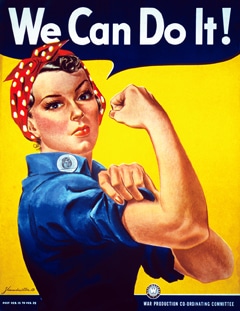 In a day and age where the people are again rising up to fight for the rights of your every day person, the Occupy movements are starting to force us to look at the issues in our society for the working class. Due to the worries over money, health care, benefits and decently paying jobs that don’t work you to pieces, organized labor unions are making a come back. New voices for these unions are the strong women who are leading them.

Three such women are Ms. Sandy Pope, local leader for Teamsters 805 in Queens, Rose Ann DeMoro, the executive director of National Nurses United and Mary Kay Henry the leader of S.E.I.U. These women are trying to change the face of the unionized labor workers and revive interest in unions across the country.

Unions have been declining for years, and Steve Early, a labor journalist says, “Some of these women might even make unions relevant to the average American again.” So what makes this different? Ms. Pope says, “I saw how empowered people felt when they had control over their lives,” after an organized strike she staged at a psychiatric hospital in her early days.  It is this empowerment and drive that the people need to change the face of the work force.

Ms. Pope came from a comfortably wealthy home in Boston, where her father was an investment banker. However, despite her family’s status she dropped out of college and started working for minimum wage. Eventually she moved on to higher paying jobs under the union of the Teamsters. During their 1979 strike, she helped with their movements to expand into the Midwestern states.

Through several job moves from big rig driving, negotiating local contracts, international representative for the warehouse unit, and then her rise to president of the Teamsters Local 805 in Queens, Ms. Pope has been driven to help others so they will not have to worry about the future of freight truckers and their livelihoods. With the stock market tumbling in 2008, much of their pension funds have been underfunded for years and the pressure to work more quickly and for no increase in compensation and sometimes lack of benefits is causing her great frustration. It is this that she seeks to change.

“Workers are getting killed on productivity standards, and they’re terrified to speak out,” She states.  “We’re supposed to leave our kids a better world than the one we’ve been born into, but so far we haven’t.”

The next of the women who are pushing labor unions is Rose Ann DeMoro who at the age of 61 is the director of the National Nurses United. Rose Ann also left college to join the workforce and organized cashiers in supermarkets as the first female for the Western Conference of Teamsters. Following that she was offered a collective bargaining position for the California Nurses Association.

When in 2004 a law was passed in California that required hospitals to have 1 nurse for every 5 patients, the governor delayed the implementation of the law. When nurses protested during his speech, he went so far as to tell the crowd to pay no attention to their special interests. Ms. DeMoro organized her union to create a protest and made a funeral in the New Orleans style for the “concept of patient care”. Afterwards the law was brought into effect.

More recently, Ms. DeMoro has helped local unions join under a single banner of a national group. Now that group has a movement called “Heal America, Tax Wall Street.” Which seeks to have a .5 percent tax on stock market trading and credit swapping that is seen in at least 15 other countries worldwide. According to figures it this went into effect as much as $350 billion dollars a year could be funded into health, education and job programs which are sorely needed. Ms. DeMoro goes on to say “we pay sales taxes every day, and so should Wall Street.”

The nurses staged a protest on Wall Street in June of this year, which has even inspired other movements like Occupy Wall Street which has now become a world wide movement for labor rights and movement.

Another strong woman in the unions is Ms. Mary Kay Henry, who is the leader of the S.E.I.U . She studied labor relations in university and joined unions right out of college. Like the other women mentioned, Ms. Henry helped stage strikes on her way to the top at Kaiser Permanente hospitals and R.N.s in Seattle.

Ms. Henry became assistant to the then leader of the S.E.I.U., Mr. Stern. He staged several unions and six million workers to strike from AFL-CIO in 2005. Afterwards he had a dispute with the organization for hotel, restaurant and garment workers. During all of this, Ms. Henry stayed loyal to Mr. Stern, who increased the S.E.I.U’s membership by 1.2 million people during his tenure. His work involved helping people into more decent pay. When he left his role, he backed another candidate for his position, but the members of the union wanted a different approach, and Ms. Henry stepped forward.

In 2010, Mary Kay was elected as the president and vows to “heal” her union. “We’re concentrating on helping those who have no voice at work.” She says. “We want the G.O.P members of Congress to focus on ways out of the economic recession.” To do this, Ms. Henry is even organizing a political action committee to help elect moderates to power.

With all of these new voices in the fore of labor movements and the strong worldwide focus on changes to taxation to the rich, decent paying jobs for reasonable working hours and the ability to provide a better platform for the next generation coming after them, women are helping to bring unionized labor forces to the public’s attention as they haven’t been in years.

Hilary Brooks is President, CEO of A Virtual Edge, a full-service virtual assistant company, and Owner of freelance web design company Small Biz Web Whiz. Hilary and her team offer a wide variety of services to busy entrepreneurs, speakers, coaches, and bloggers, providing the office and creative support they need to succeed without all the hassles of hiring a traditional employee.