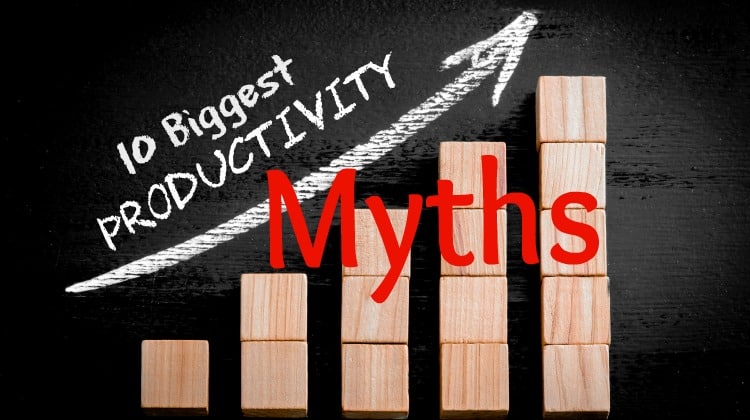 There are many who would consider themselves gurus of productivity, an endless source of wisdom on the matter, ready to dispense advice to all who ask. And, those who don’t.

While they may be correct in many of their tips, there are a number of common myths regarding productivity which are regularly shared around. Even those who are already very productive can be misguided by them, and they may just be what is holding you back. Knowing these myths for what they are, then acting to avoid them, will certainly help you dodge the reaching tendrils of reduced productivity.

These ten myths might very well be affecting you even today, and should be carefully disregarded when presented.

How many times have you thought that staying longer at work will let you get more done? Chances are, the answer is many. At face value, this is just common sense: the more time you dedicate to a task, the more complete it will be. However, this is not always true.

By adding more hours, you’re working beyond your already long day. Chances are, you’re exhausted at this point, and very inefficient in your work. Sure, you’ll get more done, but could you have done more in the same amount of time the next morning?

Carefully weighing your hours is important, and you should take care not to overwork yourself.

2. You Work Better Under Pressure

Many will convince themselves that they work better under pressure, or even actively seek to pressure themselves in order to get the task done. While this may have some benefits in the short-term, overall, this is a very unwise practice.

By adding more pressure to your workday, you’re also increasing your stress levels. Stress negatively affects both your work and your health, and keeping it at a minimum is a must. So, while a bit of pressure can be a good motivator, excessive amounts will have lasting negative effects on your life and work.

This is, again, a fairly simple concept in theory. If you can get a lot done on one task, then just think of how much you can do doing two or more! However, in practice, multitasking can sometimes prove disastrous.

You’re forced to split your attention and thoughts between two tasks, meaning that you’ll only be allocating half of your potential to each. Even in a perfect system there would be zero net increase in productivity, but because you have to constantly switch between the tasks, you’re actually losing a lot of your efficiency. This is reinforced in The Myth of Multitasking, an article published by The New Atlantis.

4. Being Busy is the Same as Being Productive

This is simply not true. Busying yourself with useless but time-consuming tasks is perhaps one of the least efficient practices possible, and you should seek to avoid doing this.

Instead of focusing your efforts on things that don’t matter, focus on relevant matters. Even if there is none available, then you should perhaps help others with their business.

The logic behind this statement is that if they are rewarded, workers will attempt to match their pay increase with deserving work. However, this simply is not the case.

If the worker is already fairly compensated, he will likely be performing to the best of his ability, and no pay raise will change that. After all, everyone has his limits. While it will be much appreciated, a higher salary won’t really cue an increase in productivity.

6. Breaks are a Waste of Time

Having a solid break schedule is massively important in any workday. Breaks help relieve stress, and make sure that you can mentally and physically handle the tasks at hand. Anyone saying that they are a waste of time is very much incorrect, and in fact, you might want to take longer breaks than you are currently.

As reported by FastCompany, the Draugiem Group recently performed a study on their employees to find the optimal break times. It was revealed that 52 minutes of work followed by 17 minutes of break was the optimal schedule, and setting up your workday in a similar fashion might just be the key to success.

[Tweet “Optimal #productivity schedule based on research is 52 minutes of work then 17 minutes of break.”]

7. The Same Productivity System Works for Everyone

Everyone is different. From occupation to personality, every person is radically different from another. Thus, one particular productivity regime can’t possibly work for everyone. Finding what is right for you, through experimentation and trials, may be a solid investment of time.

Don’t let others tell you what is best for you, only you can know that. Thus, it is up to you to determine your own productivity system.

While this myth may have been true years ago, it simply does not hold truth in this day and age. With modern digital technology, tasks which would otherwise require an office environment are increasingly possible at home.

As long as your environment is free from distractions, anywhere is a viable place to work in the 21st century.

9. Keeping a Clean Workspace Helps You to Stay Organized

Having a clean workspace is not a necessity for proper organization. It is entirely possible to have a messy workspace and high organization, or the other way around. Again, it all depends on the person, and his individual needs.

If you like things clean and neat, absolutely keep them that way. But if you don’t? Don’t bother.

10. It’s Better to do Everything Yourself than Ask for Help

While you should try to do as much as you can in a task, if you ever need help, you shouldn’t be afraid to ask. Most workplaces would prefer you to ask another for help than to do something yourself improperly. Conversely, if you are ever approached with a plea for help, do attempt to help, as it will help the coworker to improve his productivity. Know what you are capable of, and don’t try to go beyond that. If you do, chances are that it will end badly.

Keeping clear of these myths is essential to ensuring a high level of productivity. Don’t let yourself be tempted by the seemingly logical advice of these myths, and be wary of their consequences. Arm yourself with knowledge, and stay safe from these ten productivity myths.

Danny Donchev is a marketing manager of AdaptRM, a revolutionary time-tracking tool. Danny writes more posts about productivity and efficiency on the AdaptRM blog. Hit him up on Twitter @DannyDonchev anytime.