You are here: Home / Workplace Issues / 10 Worst Office Coworkers of All Time 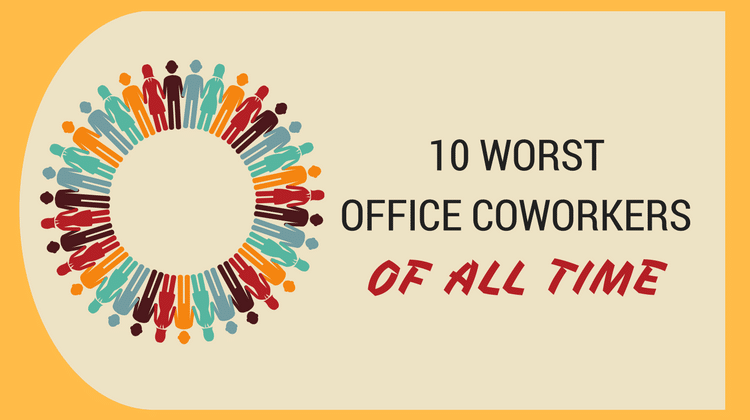 Every person who has ever worked in an office environment has come into contact with one or more annoying coworkers. If a lot of people have to share a small space, when the majority of them would rather be somewhere else, there will be people who don’t get along.

The leadership team should be responsible for monitoring employee behaviors to ensure the work environment is comfortable for everyone, but upper management can’t watch every employee during every second of the work day. They aren’t babysitters.

Your first step should be to mentally prepare yourself for the variety of personalities that you’re going to have to deal with on a daily basis. Once you recognize personalities that ruin your day, you can try to limit your interaction with people whose behaviors match those personalities. Create your own coping mechanisms to get you through moments where coworkers are making you angry or crazy.

Here are the 10 worst office coworkers of all time to help you mentally prepare for the types of coworkers you might come into contact with in the future (if you haven’t already):

Sometimes you have to work with someone who has no sense of their own volume. They might be clueless or they might simply have little consideration for how their own volume affects the people around them. Either way, a noisy coworker can be distracting and annoying.

Ongoing distractions and annoyances can reduce your productivity and make your blood boil. This type of coworker can appear in many forms. For example, The Noisy Coworker could listen to loud music, bang drawers, slam binders, tap a pencil continuously. She could also audibly share his moods by sighing, talking to herself, and so on

The Gossip loves to spread information about other coworkers, the company, and more. The information The Gossip shares may or may not be true, but the act of sharing it makes The Gossip feel important and powerful.

Regular bathing is critical in an office environment, and you can never wear too much deodorant. On the flip side, some coworkers don’t know when to stop. As a result, they pile on massive amounts of cologne and perfume. Too much of a good smell can be just as awful as a bad smell. For non-smokers, the smell of cigarettes on a coworker can be torturous.

The Smelly Coworker might not actually smell. Instead, he might cause smells. For example, the coworker who eats a fish lunch at his desk or burns popcorn in the office microwave is just as bad as the coworker who opts out of anti-antiperspirant.

We can all agree that the speakerphone was a great invention, but that doesn’t mean it should be used for every phone call. The Speakerphone Addict uses her speakerphone for every call, including work-related and personal calls.

She dials up the volume on her speakerphone, so everyone within a 10-cubicle radius can hear both ends of the conversation. Unfortunately, it seems like The Speakerphone Addict is always on her phone.

If you believed everything that comes out of The Complainer’s mouth, you’d think the world was about to end. The Complainer finds something negative about every aspect of his job and his colleagues.

His presence can create a toxic work environment if people start to believe him. Take everything he says with a grain of salt, because everything is horrible to him.

The Flirt relies on sex appeal to get what he or she wants. From the way this coworker acts to the way that he or she dresses, there is always a flirtatious undertone. For most of The Flirt’s coworkers, his or her behavior is not endearing or professional.

Only a small fraction of The Flirt’s coworkers will respond positively to his or her actions. The rest will lose respect for The Flirt. Your best course of action is to stay away from The Flirt.

“Have you seen John?” Most office employees have heard this question in regards to a coworker, and sometimes the same coworker’s name keeps coming up when this question is asked. The MIA Coworker is capable of amazing disappearing acts. He comes in late. He constantly needs to leave early for appointments. He takes tons of smoke breaks every day. He has family emergencies all the time.

If all of that wasn’t enough, he’s also very good at making himself invisible by simply disappearing within the office. Frequent trips to the copier, the bathroom, the break room, the mail room, the supply room, and so on are all a normal part of The MIA Coworker’s day.

The Busy Coworker is always so much busier than everyone else. She is constantly in a state of frenzy because she has so much work to do. Of course, much of her frenzy is probably self-made, but she doesn’t know that. She can’t finish that project for you because someone more important needs attention first. She can’t come to meetings because she’s just too busy.

She works late at night, comes in early, and works on the weekends. She doesn’t understand why you have it so easy. The Busy Coworker is often a martyr, but just as frequently, she’s simply not good at prioritizing or managing her time. Her chaos can be disruptive to the entire office.

The Talkative Coworker must not have enough work because he is able to hang around and talk on his phone or with his colleagues in the office all day. You can hear him coming and tense up because you know he’ll stop at your cubicle. If he stops, he’ll chew your ear off without taking the hint that you want him to leave so you can finish your actual work.

The Talkative Coworker is often a very nice person. Unfortunately, that means it can be even more difficult to extract yourself from a conversation with him because you don’t want to be rude.

The Tattletale is on a personal crusade to identify all employee infractions and report them to her superiors. She also likes to share those infractions with other employees and even confront employees that she deems to be guilty so they know she is onto them. For example, you arrive two minutes late, and she asks you about it before reporting your tardiness to the powers-that-be.

She eavesdrops, stalks coworker calendars, and reads everything that comes out of the shared printer. It is The Tattletale’s mission to ensure no stone is left unturned in her tireless pursuit of other people’s wrongdoings.

Do These Personalities Sound Familiar?