You are here: Home / Reader Submission / 3 Significant Implications of Deciding to Pay Your Employees Daily 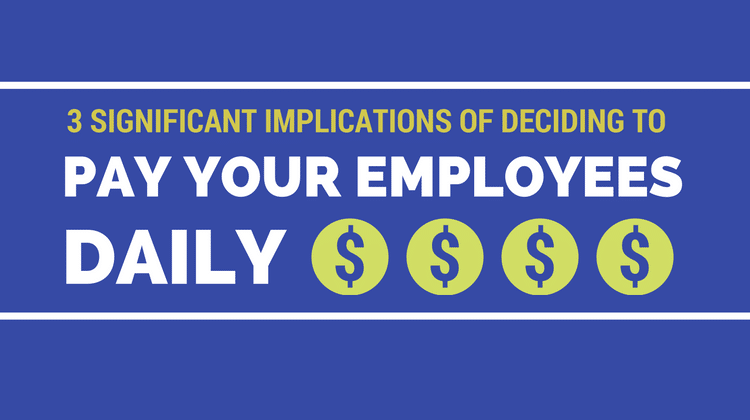 Of all the workplace revolutions predicted for the next decade, one that is rapidly gaining steam is a move by employers to pay their workers daily instead of weekly or more commonly, twice a month.

Paying in real time, or paying as the employee earns the money, may sound like a brand new concept, but years ago it was not uncommon. Companies often advanced payments to workers in need as well, a practice that is no longer feasible with the outsourcing and automation of payroll functions.

To bring a pay-as-you-work system back into place in your corporation or organization, there are three significant implications that not only involve your firm, but the country in a larger context. They are:

The current cultural acceptability of having workers wait to receive the money they have already earned has fostered an entirely new industry of payday loans through companies that give people the money to tide themselves and their families over to the next payday has emerged. Worldwide it is now a $100 billion business, and in the United States alone, the revenue in that industry is tallied at $46 billion.

Other employees, instead of resorting to the desperate move of payday loans, end up missing payments on credit cards or paying bills late thereby incurring late payment charges. The overall cost of employee bank overdraft changes and penalty payments for late payment charges in the United States is about $200 billion each year.

And employees are facing this burden, knowing that they have already earned that money to handle the bill, but they have been unable to collect it. This is a social issue that would be addressed if employees received the money they are owned as they work.

2. Addressing the How-to of Such a Changing System

Incorporating such a significant payroll change may sound like a human resources department nightmare, but new technology is easing the challenge significantly.

Already, technology startup firms like DailyPay, ActiveHours, FlexWage, and PayActiv have come up with creative software programs that would allow any company to pay workers at the end of their shift on a daily basis.

The way it works is to use a software application such as the one developed by Vancouver, Canada firm Instant Financial that is overlaid on common existing payroll systems like Ceridian, PeopleSoft, and ADP.

It then takes control of the pay portion of the payroll program by issuing each staff member a debit card that works in any retail environment or allows the workers to transfer the money from the debit card to their bank account. There’s no burden of direct deposit or fallback to costly paper checks.

3. Addressing the Challenges of the Coming Gig Economy

The big issue when radical change is proposed within the workplace is whether an innovative idea could be applicable to your organization.

Where it is really being hailed as a welcome idea is with companies that deal with large numbers of contract workers in the burgeoning gig economy.

Already, giants in that sector like Uber and Lyft have started to offer to square up with their drivers at the end of their shifts. Uber already uses the prepaid debit card idea, and Lyft uses money transfers.

Companies that rely on contract workers find this builds company loyalty and really impacts the number of shifts people call in sick for, all but diminishing them.