You are here: Home / Social Media / 5 Reasons No One is Following Your Business on Twitter 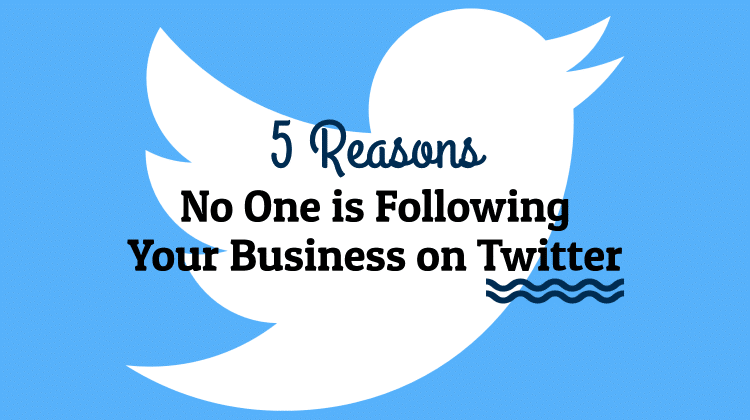 Almost one-quarter of adult internet users are on Twitter, so it makes sense to include this platform in your marketing plans. By using Twitter, businesses can build brand awareness, promote their content, and drive traffic to their websites. However, that only works if people are actually following you. If no one is following your company on Twitter, you won’t benefit much from using the platform.

So, where is everybody? Here are five reasons why no one is following your business on Twitter.

No one wants to follow a spammer, and if you’re not careful, it’s easy for your business’ Twitter feed to look spammy. You’re excited to share links to your latest blog posts and links to your offers, but if you never share anything else, people won’t want to follow you. Would you want to follow an account that only tweeted messages like “check out my blog,” even if that blog was great? No, and your customers don’t want to, either.

To avoid seeming spammy, don’t just share links to your own content. Instead, share your company’s content about 20% of the time. The other 80% of your posts should be interesting, shareable content that’s relevant to your audience. For example, you could tweet links to interesting news articles or retweet posts from influencers in your industry.

2. You Don’t Interact with Anyone

A good place to start is with your Twitter mentions. When you see a customer has commented on one of your posts or has asked you a question, make sure to respond. You can also start conversations on your own to get your followers talking to you. For example, you could ask a question about your industry to start a conversation.

If you only have a few minutes a day to spend on your Twitter account, you may be tempted to share a lot of interesting posts at once. When you do that, your followers’ feeds will get overloaded with your posts, and if you drown out the other accounts they’re following, they may unfollow you.

To avoid annoying people with too-frequent posts, use a scheduling tool to spread out your posts throughout the day. You’ll still only need to spend a few minutes setting up posts for your account, but the tool will automatically post them at times you’ve specified.

On the other side of the coin, there are some businesses that don’t tweet often enough. If you don’t tweet every day, or if you have long periods of inactivity when you get too busy, people may unfollow you. People don’t want to follow accounts that aren’t useful to them, and accounts that barely ever post aren’t useful. So how often should you tweet? The ideal posting frequency for businesses varies depending on your goals, but if you want to drive engagement, one to five posts per day is good.

Some businesses don’t post often because they don’t know what to talk about on Twitter. If that’s why you’re not posting often, try offering hints and tips for your audience, asking questions to start conversations, or tweeting behind-the-scenes pictures from your business. When in doubt, you can always retweet an interesting post that someone else wrote.

The best times to post will vary from business to business, but as a general rule, people check Twitter on their downtime, like their commutes and breaks. Try posting between noon and 3 p.m. between Monday and Friday, and between 5 and 6 p.m. on Wednesdays. Monitor your engagement, and if your audience isn’t responding to your tweets during these times, make adjustments as necessary.

Have you been making any of these mistakes? Don’t worry, since these mistakes are all fixable. Make some adjustments to your business’ Twitter strategy and you should see your follower count start growing in no time.

Jennifer Mitchell is a business writer based in Canada. She specializes in content marketing, blogging, and social media marketing, and has a passion for helping businesses succeed.