You are here: Home / Reader Submission / 5 Signs You Are a Creative Person 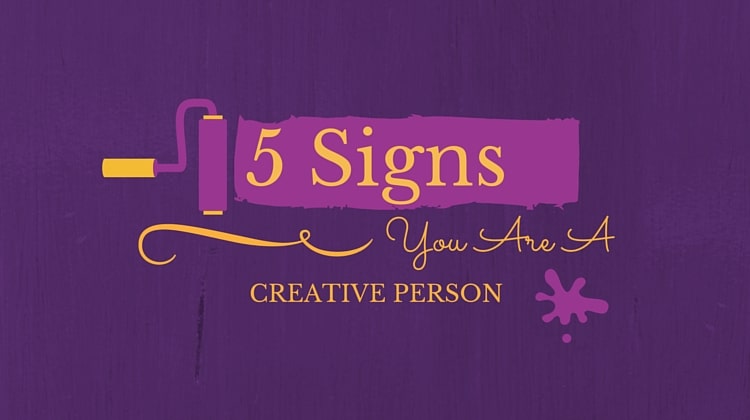 In this new ‘entrepreneurial age’, creativity is an attribute which is increasingly regarded as the key to success. This is no real surprise, given that its dictionary definition is ‘the use of the imagination or original ideas to create something’. But how exactly can you tell if you are a ‘creative person’?

1. You work long hours and lose track of time

Creative people tend to work long hour, and to lose track of time when working on creative tasks. It is not uncommon to find creative types awake at first light or working overnight on their projects, not wanting to stop while they are ‘in the zone’. This is due to a phenomenon known as the ‘flow state’.

Kaufman, a psychologist known for his research on creativity, notes that “[Creative people] have found the thing they love, but they’ve also built up the skill in it to be able to get into the flow state. The flow state requires a match between your skill set and the task or activity you’re engaging in.”

It’s also common for creative people to have unconventional work schedules, based on the times they feel most creatively productive. If you are looking to improve your creativity, looking at the times when you feel most productive may be a good starting point.

2. You are a dreamer and follow your true passions.

Creative people could also be described as the ‘dreamers’. They are often the ones who are the most willing to take risks and follow their true passions. Psychologists have shown that highly creative people are energized by challenging activities, and that they are ‘intrinsically motivated’ – meaning that they are motivated to act from some internal desire, rather than a desire for external reward or recognition.

If you are looking to develop your creativity, it may be worth spending some time thinking about your motivations for doing what you do and where your passion lies.

3. You embrace solitude and mindfulness.

Artists and creatives are often stereotyped as being ‘loners’, but in fact, psychologists have stated that solitude may be the key for creative types to produce their best work. The American existential psychologist Rollo May wrote, “In order to be open to creativity, one must have the capacity for constructive use of solitude. One must overcome the fear of being alone.”

4. You seek new experiences and surround yourself with beauty.

“Diversity of experience, more than anything else, is critical to creativity,” Kaufman states. Creative people tend to love to expose themselves to new experiences, sensations, and states of mind. Creative people are more likely to travel for pleasure and often have a wide variety of hobbies and interests.

Creative people also tend to be observant by nature, curious about the lives of others, and often like to ‘people-watch’ – some even generate their best ideas from it. Kaufman states that a lot of writers are keen observers of human nature for whom people-watching is very important. He gives the example of Proust, who spent almost his whole life ‘people-watching’ and writing down his observations, which eventually came out in his books.

It has also been noted that creative people tend to have excellent aesthetic taste and a desire to surround themselves with beauty. A study recently published in the journal Psychology of Aesthetics, Creativity, and the Arts showed that musicians — including orchestra musicians, music teachers, and soloists — exhibit a high sensitivity and responsiveness to artistic beauty.

If you’re looking for a creativity boost, a new experience, surrounding yourself with beauty, and taking some time to observe the world around you may be just what you need to get inspired!

5. You may have a tendency for depression and alternate between fantasy and reality.

Research has shown that when highly creative people are hard at work, their tendencies edge toward bipolar. A 2002 Stanford University study revealed that creative types are more likely to access a broader emotional range than the average person. While this can produce startling displays of innovation, the darker side of the emotional range also often seeps through. Other studies, most notably a 1993 study performed at Johns Hopkins University, have found that distinguished artists are 10 to 30 times more likely to suffer from manic depression and major depression.

It has also been noted that creative people tend to alternate between fantasy—or imagination—and reality. It’s often said that creative types are ‘in their own world’. Both great art and great science involve a leap of imagination into a world that is different from the present, and it is the ability to form connections between these two worlds which results in great art or innovation.

These are just five signs that you are a ‘creative person’, but the field of creativity has been studied extensively and there are a wealth of resources available, both in print and online. If you’re hoping to become more creative, the list above should provide some inspiration as a starting point!

Laura is a professional linguist based in Lancashire, England and provides literary/commercial translation, writing, editing and proofreading, freelance project management and consultancy, linguistic support and other language services on a freelance basis. In addition, Laura maintains a blog at LanguagebyLaura.com on translation, languages, literature and business, as well as offering a book review section, and a number of downloadable resources for translators. Laura regularly writes guest articles for various external sites, and attends a number of industry conferences and events. In her spare time, she enjoys reading, writing, music, travel, yoga and the Internet.