You are here: Home / Infographics / 5 Ways to Say No at Work – Infographic 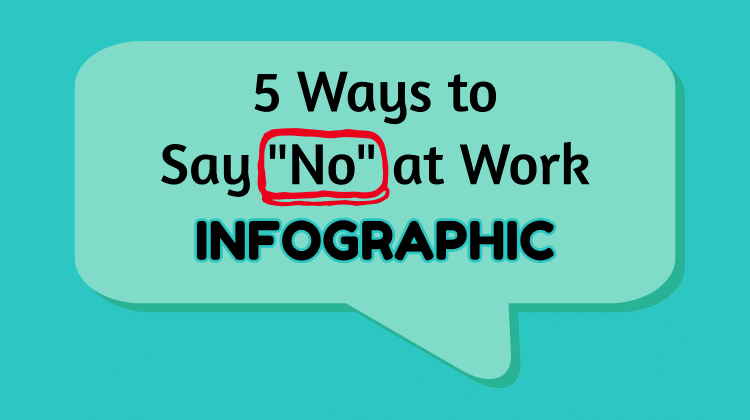 You’re so busy at work, but your boss and colleagues keep piling more work on you. What do you do? How do you just say “no” without getting fired or labeled as not a team player?

I think as women, we’re more likely to have trouble saying no than men. If you take a look at some research, you’ll find this is actually true. A 2014 study revealed that it’s not personality type that makes it difficult for women to say “no,” it’s social norms. The reason was attributed to women traditionally being perceived as helpers and nurturers. When a woman says “no,” that action defies what people expect.

The research also found that women who do say “no” have worse performance review results and fewer promotion recommendations. On the other hand, women who say “yes” more often are seen as team players. In other words, women are viewed as “less likable” when they don’t conform to other people’s expectations based on social norms.

The study authors determined that women feel guilty when they say “no.” In addition to the emotional effect, women also don’t want to say “no” as often as men because they don’t want to be treated negatively as a result by their bosses and colleagues (which the research proved happens to female workers every day).

How to Say No at Work?

The research shows why women have a harder time saying “no” at work than men, but how do you change that and learn to say “no?” Importantly, how do you say no without instantly being labeled as not a team player?

Many experts have provided recommendations to learn how to decline requests without feeling guilty while also limiting negative repercussions from your boss or colleagues. The Business Backer collected some of those suggestions and published the infographic below showing five of the best options:

Take a look at the details in the infographic and try each recommendation. Once you try them, come back and leave a comment below to share your results.

Courtesy of: The Business Backer