You are here: Home / Reader Submission / A Social Call to Arms for Entrepreneurs and Investors 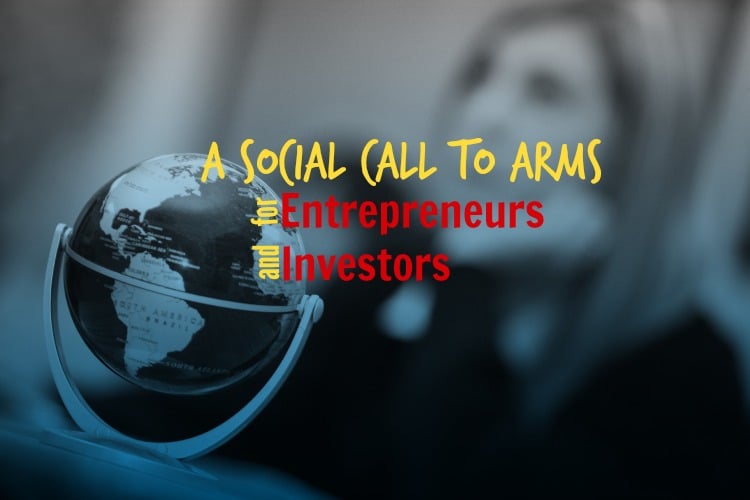 A “call to arms” may bring up savage images for many of us. But, according to Webster’s, it can also mean “a summons or invitation to undertake a particular course of action.”

It’s the nature of the times we live in. Everyone wants more meaning in their lives. So few of us have every wish fulfilled – even if we have everything we ever wanted. Success, fortune and fame still make us feel empty. Those who don’t have everything have a hard lesson ahead if they ever do make it – that money and fame without meaning makes someone feel even emptier. Just watch any episode of Entertainment Weekly or Extra to see what emptiness looks like.

The good news is that many are starting to wake up. How many times have you heard people say they are unhappy at work? More likely, they feel unfulfilled.

More and more people are becoming painfully aware of their robotic and meaningless routines and feel their purpose on earth is greater. They want to be an instrument of change. They want to help others and make the world a better place. Still, only a few are brave enough to make a move and begin to explore what fulfills them.

In the twelve years I was part of the corporate world, I was miserable. I worked 18 hours a day but constantly felt bored. I so wanted to create something meaningful. My passion is local businesses!

All empty words as this couldn’t be farther from the truth! “Supporting small businesses” makes you sound good. And if you can sound good without being good, what do you have to lose?

Small businesses, who are without a doubt the core of our economy’s success, are treated as second- class citizens.

As far as lawmakers are concerned, small businesses exist as an idea that they can speak about at election time. But when was the last time a lawmaker actually chatted with real small businesses not just for the sake of a great photo-op?

Small businesses don’t have lobbyists. Amazon, Google, Verizon and their likes do. So when important laws are in the works that can really provide lifelines to these small businesses, lawmakers hear what the giant corporations want them to hear – not Joe the Plumber from Austin.

According to the Small Business Association, a small business is one that has 500 employees or less. Is a general contractor who does everything on his own (marketing, estimates, proposals, purchasing, invoicing, collection and, of course, the actual handyman work) in the same boat as a general contracting firm that has 500 employees – with HR, billing, marketing, sales and business development departments? These are such differences between these two “small businesses” that lumping them into the same category is absurd. What is even worse is that when lawmakers do ask the opinion of a small business, it is usually a 500 employee business rather than the single-person enterprise!

And when it comes to most of the companies who advertise how they help small businesses, in most cases, this actually means that they are exploiting them to buy things they don’t need at prices they can’t afford.

The Rise of Social Entrepreneurship

As a female tech founder, I initially felt the need to hide the fact that I was driven by creating change and challenging injustice. Unfortunately, it is too easy for the heavily dominated male investor community to laugh at a woman who thinks she can change the world. Instead, I showed them how extraordinary my company’s technology is and how sound our business models are and at the same time, kept to myself that my company can revolutionize local commerce.

What I am doing is called Social Entrepreneurship. Social entrepreneurs, unlike regular entrepreneurs, don’t see money as the end game. Rather, the change and the betterment of society and the world is what we are working for. Money and profitability are important to us, primarily because a viable business model makes the company sustainable. This is what sets social enterprises apart from charities or nonprofits.

Richard Branson is one of the most respected social entrepreneurs and is largely responsible for old school investors becoming interested in social enterprises. But it doesn’t take solving world hunger or global warming to be a social entrepreneur. Sometimes it only takes selling products that are socially responsible – good for the person using them and good for the environment, such as Jessica Alba’s Honest Company. I am lucky enough to be part of the Social Venture Network (SVN) whose mission is to help social entrepreneurs act on this calling and create successful and profitable enterprises.

Too much time and talent are being wasted on building another gaming app or another video sharing website when real problems need to be solved – some right outside your door. If enough brilliant minds would care to solve urban problems — from homelessness, education, small business empowerment, illegal workers, racism and intolerance — we could have already been living in a better and safer world.

What if we had technology that would measure a person’s pulse or analyze his Twitter posts and automatically lock his gun if he were in an angry state of mind? Imagine how many school shootings could be prevented? What if we can create portable bomb and gun detectors to be worn by cops and civilians? What if we figured out how to empower low-wage workers so they don’t end up on the streets?

Social entrepreneurs don’t sit around and wait for the government to fix problems. They do it on their own.

Shana Schlossberg is the founder and CEO of EZBZ, an open, online, reverse-bidding marketplace. She recently participated on a White House small business panel sponsored by the American Sustainable Business Council and will be speaking on Social Entrepreneurship at the SVN conference on April 18th in San Diego, CA.