You are here: Home / Reader Submission / The Elephant In The Global Economic Room 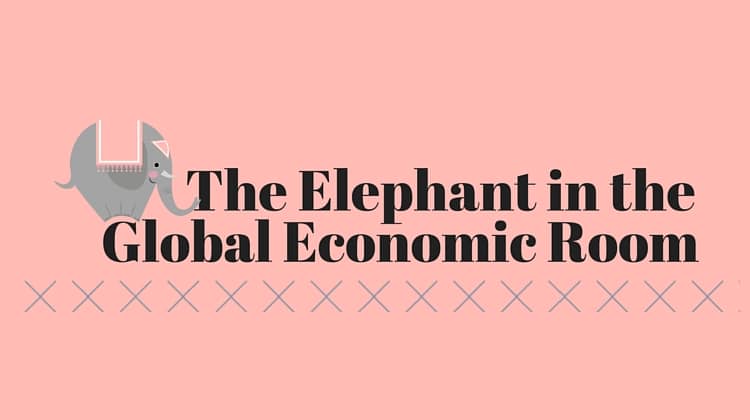 As we head into the tail-end of the year, and what seems like a never-ending set of horror stories from across the globe keep dominating local headlines, I’ve found some of my economic and business thoughts inevitably turning overseas.

Not to Europe – where I think the fundamentals are reasonably sound despite the various political and security challenges they’re currently facing. No, it’s the so-called BRIC countries that are currently occupying much of my attention: Brazil, Russia, India, and China.

Of the four, I’m largely bullish on Brazil and India and expect a decade of outsize returns coming down the line from those quarters. Russia remains something of an enigma to me in economically and I’m far more concerned about its Fats Domino loving leader than anything else; especially considering the United States is largely insulated from Russia economically these days.

China, on the other hand, is a different kettle of fish altogether and one whose economic destiny America is horribly intertwined with. Whether it’s the fact that China continues to supply the manufacturing capacity for the vast majority of our industries, or the fact that we currently owe them over $1 trillion (yes, you read that right – that’s trillion with a T), if China catches a cold, we’re going to be doing a lot more than sneezing.

This is an economic relationship that, however indirectly, impacts every single business and individual in America in very real terms. That’s why a recent article from Bloomberg should have every American sitting up and paying attention.

As most readers will doubtless be aware, China is very far from being a transparent economy in any kind of conventionally accepted Western sense.

There have been rumors circulating for quite some time that something rotten is lurking at the core of their unprecedented sequence of economic growth and there’s an increasingly large amount of fire starting to appear in place of what was previously just smoke.

Now, America has of course had its own run-ins with speculative bubbles of dubious character over the years – the 2008 meltdown and previous S&L fiasco being the two outstanding recent candidates – and this is the kind of tarpit many countries inadvertently wander into from time to time.

The worry with China is that normal market forces which would eventually force push to come to shove are effectively suspended under the benevolent eye of the Chinese state. A bubble that would arguably have long ago popped in a western setting is at risk of inflating beyond manageable proportions.

A few short years ago, this would have been of potentially strategic advantage to America – as in the case of the economic collapse of the Soviet Union. This time around though, we’re up to our necks in what is looking increasingly like the world’s biggest Ponzi scheme and things might not be pretty when that red tide eventually goes out.

Gerard Santinelli is CEO of Santinelli International, a company that helps eyecare professionals grow their businesses.