You are here: Home / Reader Submission / Embracing Your Female Voice 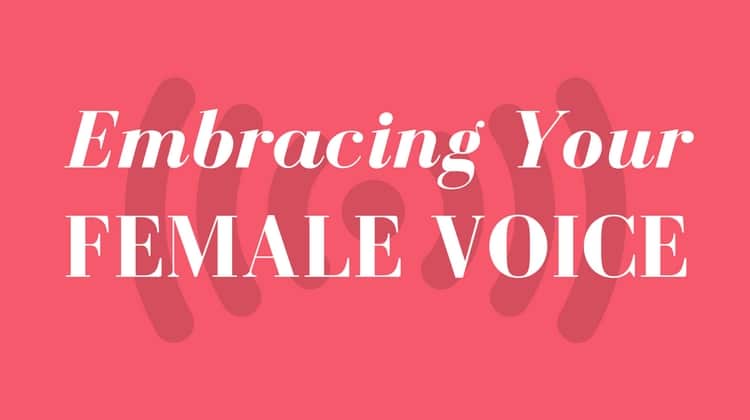 I was once told by an employer that my voice was too high and too loud. Even worse, I raised it ever so slightly at the end of a thought, indicating a question or insecurity. He suggested I take lessons with a voice coach.

Eventually, I did reach out to a friend of mine who moonlighted as a voice coach and sent over the same product video that caused the initial complaint. I asked if my cadence and pitch really did muddle my message when I spoke in that stereotypical “female” way. The answer surprised me a bit — it did not. I had expected to be corrected and coached, but instead I was comforted.

As a former trainer and current director of sales/marketing, I do a lot of public speaking. Presentations are eclipsed only by coffee on my list of enjoyable activities when working. Because of that, I’ve spent a lot of time contemplating my voice after that initial complaint and comparing it to the voices of other executive females.

Here is what I’ve learned about embracing my undeniably female voice:

There are so many articles written about the harm upspeak does to women in the workplace. That habit of raising the tone at the end of a phrase or sentence can be considered juvenile or servile. It’s been said that a speaker who habitually talks in upspeak is unsure of herself or the content she’s presenting. I beg to differ.

After analyzing two different speaking samples, I found that I employ upspeak after a concept or subject. Before moving on to another topic, I’ll raise the tone of my voice to engage my audience. A way of saying “does this make sense to you?” without asking that question directly, which can come off as condescending when used too frequently. When used judiciously, upspeak can actually contribute to the message, rather than detracting from it.

2. High pitched voices, when natural, are just as good as their lower pitched brethren.

The complaint that my voice was “too high” was one of the hardest to confront. Changing the pitch of a voice is incredibly difficult and there’s very little science to prove it’s worth it. When listening to other women speak, I’ve noticed that the only time an audience seems to truly mind the pitch of a person’s voice is when it’s unnatural. For example, someone who raises his/her voice until it’s squeaky or someone who lowers it because they’ve been told to do so. Instead, I’ve found that confidence is typically conveyed when using your natural speaking voice. High or low, it’s all about having the confidence to speak in a way natural to yourself and your particular set of vocal chords.

I come from a long line of loud talkers. If you were to throw my consultant sister, executive mother, and myself in a room, you wouldn’t be able to hear yourself think. Strangely enough, we have all sought out career paths that involve a large portion of the day spent speaking in front of others. When I asked my mom about this, she said simply, “I’ve never had to use a microphone.” Which made me think, there’s nothing worse than listening to someone who is hardly audible.

While a loud speaker can occasionally seem overwhelming in a small space, we, as women, are so often chided for not speaking up or asserting ourselves in the workplace. By speaking loudly and clearly, we can make sure we are heard by all those involved in a discussion. This does not mean shouting over others but simply speaking loudly enough that “pardon?” is never peppered throughout the conversation. When speaking audibly, we limit misunderstandings by making sure our words are heard correctly and we’re never asked to waste time repeating ourselves.

For any other women asked to adjust their speaking style, I strongly encourage you to think long and hard about why you’re being asked to do so. Those traits so often associated with women speakers may not be the detriment we’ve been taught to believe.

Nikki Yeager is a Co-Founder and the Director of Sales/Marketing for EHR Tutor, a product of Noggin LLC.