You are here: Home / Archives for voice lessons 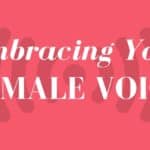 I was once told by an employer that my voice was too high and too loud. Even worse, I raised it ever so slightly at the end of a thought, indicating a question or insecurity. He suggested I take lessons with a voice coach. Eventually, I did reach out to a friend of mine who moonlighted as a voice coach and sent over the same product video that caused the initial complaint. I … END_OF_DOCUMENT_TOKEN_TO_BE_REPLACED