You are here: Home / Communications / How to Deal with Being the Only Woman in the Room 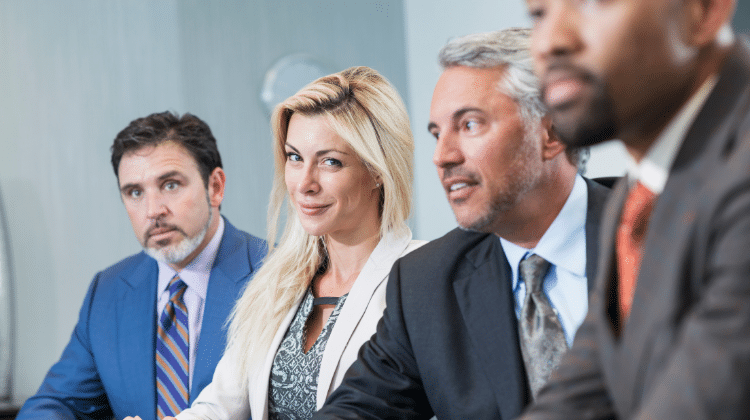 As women over the years achieved more and more success in male dominated worlds, it has become more common that they face the associated challenge; that of being the only woman in the room or the team. This can present challenges around getting yourself heard.

As a young woman in a senior position, I have certainly experienced this on many occasions. While sometimes the experience can be positive and wholesome, in other situations it can also leave you feeling uncomfortable.

For example, I will never forget the time I was assumed to be another director’s wife, because how else could a woman possibly be in a senior management meeting with men and keep them so well ‘in line’? I have also been mistaken for the PA or person bringing the refreshments – despite not an apron or tray in sight!

Here are my top tips for making sure you get heard in a male-dominated meeting room.

Don’t Be Afraid To Be Vocal

Recent studies show that men are far more vocal in meetings than women, with a Bloomberg report, conducted in partnership with Prattle, finding that men spoke 92% of the time on the 155,000 company conference calls studied.

Similarly, another report published in the American Political Science Review found women speak 25% less than men on average during meetings. The same study also found that women are more likely to be interrupted when they are speaking.

It is important to be aware of this, so you can be sure to get your point across. If somebody interrupts you, do not be afraid to politely ask them to allow you to finish your point.

Remember, your opinion is just as valuable as everybody else’s in the meeting, do not shy away from making the point just because others may be dominating the conversation.

Holding back is particularly common for women when we want to suggest or ask a question that we know may not be positively received. We are far more likely to want to seek positive validations from our contributions to a conversation than men. Do not let this deter you from making more difficult points. Own your perspective, ideas and curiosity – it will offer a valuable input to the discussion!

It is no secret that typically men are far more self-assured and confident than women. A recent paper by the National Bureau of Economic Research found that women consistently rated their performance on a test lower than men, despite both groups achieving the same average score.

Generally, women are more prone to suffering a confidence crisis than their male counterparts. In light of this, it is clear to see why women can often lack confidence in a male dominated environment. Be sure to pump yourself up so you walk into the meeting feeling confident and ready. You have earned the right to be there, so embrace it.

If you adopt confident body language and speak with conviction, you are more likely to be listened to and avoid interruption. Social psychologist, Amy Cuddy of Harvard Business School states that behaving confidently can increase your actual confidence! So… ‘fake it ‘til you make it’ certainly has some standing here!

Think About Your Language

Language is a powerful tool and becoming conscious of the way you phrase what you are trying to say can have a huge impact on how you are perceived. Generally, women are more prone to adapting their conversation and language style to promote likability and cohesiveness. This is in contrast to men who typically adopt a more assertive style to be seen as dominant and in control.

Deborah Tannen, Professor of Linguistics at Georgetown University, reported that when speaking, “women are more likely to downplay their certainty; men are likely to minimize their doubts.”

This is exacerbated by other differences. For example, women tend to apologize frequently, “as a ritualized means of expressing concern,” in opposition to men, “who are more likely to focus on the status implications of exchanges.”

Overall, this can mean a woman is perceived to be nervous with a lack of self-assurance, resulting in a lack of recognition or respect for their contributions to a conversation or meeting.

Here are some quick fixes to ensure you speak with clarity and confidence:

Women tend to naturally use fillers to soften what we are trying to say. Stop using ‘um’, ‘like’ or other fillers. This will convince others you are certain about what you are saying, which automatically encourages them to pay attention.

Quite often, we can ask for validation for what we are explaining. You may find yourself asking others, ‘Does that make sense?” “Do you understand what I am trying to say?” This automatically puts the focus on you – that perhaps you were incoherent in your explanation or you are unsure about your contribution.

Instead, follow up with a statement such as, ‘I welcome your thoughts,” or “Is there anything you would like to add?” This allows others to ask questions or offer their perspective without undermining your own contribution.

Qualifiers can make you sound like you are questioning your contribution before you have even had the opportunity to make it.Consider the difference between these two statements:

As Tannen’s research demonstrated, women generally apologize a lot more frequently than men. This isn’t because we believe we are always at fault, but sometimes, it’s just to show our empathy for an unfortunate situation.

However, this can be perceived as accepting blame for something that is not your responsibility. Avoid unnecessary apologies.

5. Talk with Clarity and Confidence

It is not just what we say, it is also how we say it! As women, we generally speak more quietly than men. We are also far more likely to conclude our points on a high rising terminal (or up-speak), which can lead to a statement sounding like a question. This can make you sound unsure or that you are seeking validation.

In contrast, adopting ‘down-speak’ (your pitch bending down as you approach the end of a statement) is known to make you sound confident. This is a style of speech more typically adopted by men. So, consider the pitch and volume you deliver your statements in to ensure you are perceived as confident and assured.

There is no doubt that there will be colleagues, mentors, and other people looking to support you. Remember to look for support and use it! Likewise, also look to help others in your position.

Finally, you are not alone! You may feel like you are the only one in the room, but there are plenty of women everywhere making encouraging steps into male-dominated fields!

Elizabeth Mills is Managing Director at BYT Enterprises Ltd, an education and training company, and co-founder of the William Mills Foundation, a charity providing opportunity for young people. Elizabeth was awarded ‘Women of the Future’ 2019 for her contributions to UK business. Under her leadership, her company was also awarded the ‘Job Crowd’s’ awards ‘Top graduate and early careers employer’ in 2019/20. Elizabeth graduated from the London School of Economics as a ‘Bottriell scholar’ with a qualifying law degree. Since graduation, she has held various senior roles in business and is currently responsible for the operation and success of a multi-site company in the UK. Elizabeth is passionate about supporting other women in business and leadership.