You are here: Home / Reader Submission / Is Your New Recruit a Good Fit for the Position? 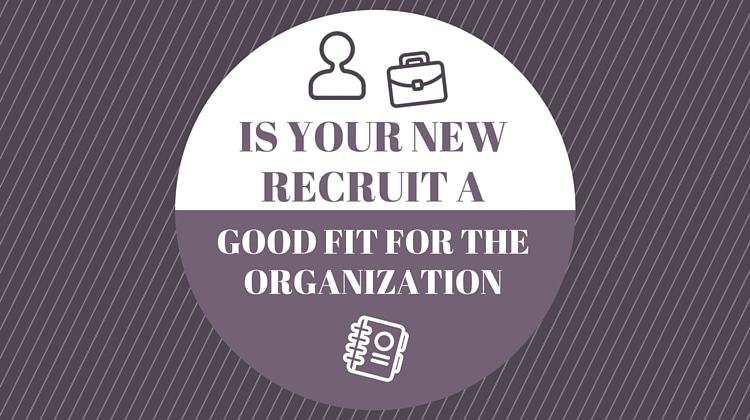 The two most difficult decisions human resources professionals must make with regard to a recruit are the decision to hire them and the decision to keep them or let them go at the end of their probationary period.

Determining the candidate’s skill and experience is usually a relatively straightforward process. What is complicated is determining after the hire whether or not the new recruit is a good fit for the position.

In their early weeks of employment with your firm, it is vital to be able to determine whether or not the recruit is fitting in with the corporate culture and the team with whom they must work.

What are some clues to determine whether things are working out?

Start by ensuring the new recruit is aware of the parameters of the corporate culture and seems at ease with them. Make sure initial orientation sessions include discussions about not only what work needs to be done, but how that work is usually done. Does everyone help each other, or do people work alone with their own systems?

Is the focus on individual accomplishment or team work? What are the dynamics of teams and what kind of people will the recruit be working with (all newcomers like themselves, experienced people who can mentor them, or a mixture?)

How is the company structured? Are decisions in departments taken democratically, or is the management process autocratic? How does the new recruit feel about working in the structure as it currently exists?

Does the new recruit’s personality blend easily into the team or department where they will work? Are they eager to make a good impression and respectful of their co-workers, or are they arrogant and demanding? If personalities are constantly clashing, that is a red flag that the new recruit may not fit in.

Make a point of observing the new recruit’s interactions not only with their supervisors, but also with their co-workers. Bring co-workers into the interview process and observe the chemistry between the recruit and those around them.

Do not tailor all of your questions to the new recruit about work-related matters. Try to establish details on the kinds of activities they enjoy when they are not working as a means of ascertaining what they value. Are they big sports fans or weekend athletes, do they do volunteer work or play in a band?

Ask open-ended questions about their career goals and their plans for the future. That includes asking where the person sees himself or herself in the company ten years from now. Sometimes such a line of questioning reveals the person’s long-term career plans or it may indicate whether they think the new job is just a stepping stone or a career where they hope to stay and work.

Perhaps the most important area of investigation of a new recruit centers on their work ethic. Intelligence, goals, and skills notwithstanding, some people have the capacity to work long and hard, and others shy away from anything other than the minimal acceptable effort.

Look for clues about whether your new recruit welcomes challenges or seems content with doing merely what is asked each day and nothing more. Watch the pace at which they work. Are they in early and staying later to ensure everything is done, or are they noticeably watching the clock? Which kind of employees are they gravitating towards?

Seek clues about their motivation for work in their life. Are they trying to pay off debt, support themselves and a family, save for the future, or securing just enough so they can take off and see the world? Your intent in determining these insights into the recruit isn’t to judge them or their lifestyle goals. Instead, it is to seek out clues to determine whether or not they are a good fit within your organization and its goals.

As a human resources professional, you have a clear concept of the qualities that are most sought after within your organization. You may know your new recruit has the skills, but their first few weeks on the job will let you know whether or not they have the value system and personal qualities that make them a good fit.