You are here: Home / Female Executives / Why Women Have Thicker Skin – Insults and Stories 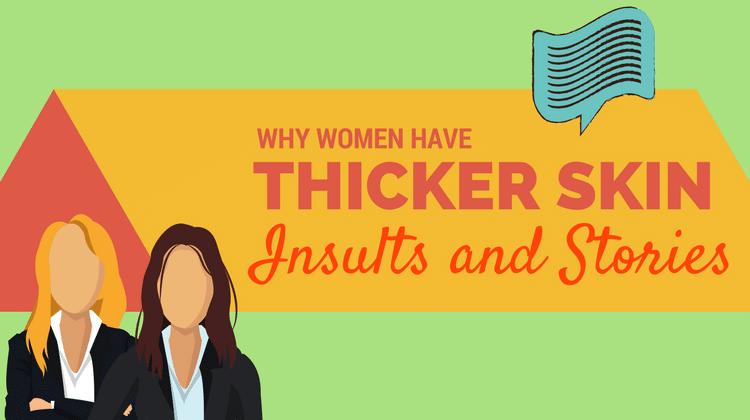 There has been a lot of news recently about how women have been treated by executives, investors, and management. This is why women have thicker skin!

Women have thicker skin — it’s a fact! The sad part is as a female founder, I was not shocked at all but thankful that there were some brave women that got tired enough of it to speak out. This happens more often than you think, however, we just take the punches and move on.

I get the question all the time, “Is it hard to be a women founder or entrepreneur?” I have always just thought of myself as a CEO, a founder, an entrepreneur. I’ve always had the motto of working harder, smarter, and faster than anyone else — male or female. I have never put myself in the “female” box for that reason. I’ve never tried to compare my compensation to one of a man. I just have chosen to make my own destiny. But there are some things I’ve experienced over the years and lessons learned that I can share.

If I’m honest, I used to cringe when interviewing job candidates who said they were married with kids — male or female. As a result, I thought that work could never be a priority. They would have to be leaving early and couldn’t fully commit to the company. Admittedly, I was single and naïve. I didn’t have a husband or kids. I just assumed that was the case.

Transitioning from being single, working 100+ hours a week, and being a total bachelorette to being married and adopting a son in my mid 30s wasn’t easy. It was one extreme to another. My friends still laugh about it as I was probably the “most likely to not go this route” person they knew. I didn’t take time to figure out how that would work or how I’d be able to manage the balance. I just knew I’d figure it out.

I made a promise to myself and my husband that family would be #1 and companies would be #2. I had to learn how to create balance, to work smarter, and get up earlier so nothing saw a sacrifice. Today, I live off time management, lists, and caffeine. In addition, I love hiring working women, moms (married or single) as I know they will be able to multi-task like no other. Women have thicker skin contrary to what men think.

There are two types of business men.

I have found that I run into two types of men in the business world.

1. The business executive that thinks it should be a “bro-mance” executive world: This tends to be the guys with insecurities, mommy issues, and some previous women issues in their lives. So I stay away from these guys but run into them every day. If you have one of these bosses, clients, and/or investors, this is going to be an uphill battle, and you should learn to deal with these types of men. Rather, I’m happy to share some tips if you are dealing with this.

2. The non-ego men who realize there are bad ass women out there — they have moms or wives like this: Hence, these “non ego” men have been taught this from an early age or embraced it as an adult with experience. Somewhere down the line, they’ve had a female boss or co-worker and respected her. These are the great kind and the “bromance dudes” give them a bad name.

You are going to get the “one liners” regardless; pick your battles.

As a women CEO, over the years, I’ve gotten enough one-liners, sexual advances, and rude remarks that I could fill up a book with stories. Many times I have gotten angry or depressed, but I never let it take over. Women have thicker skin, so we take the punches and move on. You must let it fuel your determination and success and use it to get EVEN. I’ll give you three stories that come to mind without naming names or calling anyone out.

Male Venture Capitalist: I was running a very successful company as the CEO. We had raised some money from several sources — one of our largest investors was an institutional investor. Our executive team was getting the company ready “to sell” as we were at our peak. In a board meeting, this venture capitalist had an agenda item that suggested I should step aside as CEO because he thought that we could sell the company better if we temporarily brought in a “white haired, male CEO”. Those were his exact words! He thought when dealing with merger and acquisition groups, they would want to negotiate with an older man. A woman negotiating would have a disadvantage. If you read any of the news on how low the percentage of women led companies get venture capital money, this will not shock you. It happens all the time.

Prominent Businessman and TV Celebrity: I had a heated debate with this guy (I won’t use gentleman on this one) about work/life balance. He told me that you could not be happy in your personal life and be successful in business. Now, this is what an unhappy person says, however, I could not agree with him on this. As a seasoned entrepreneur, I’ve earned the right to not have to work with businessmen or women that I don’t like or trust.

He went on to say, “How do you dedicate yourself to business with a child?” I’ll leave out all the other horrible details, however, he did not think a “married women with a child” could be as successful as a single person in giving him 110% of their life. Rather, these are the lonely people that will never have happiness or change.

Fortune 500 Male Executive:  I was doing a consulting project for a large healthcare company and the executive was unbearable to work with. In presentations, he would only talk to my male employees that reported to me, addressing questions to them rather than me. As a result, this executive would praise them for our work, while never acknowledging me.

Long story short, it turns out his boss was a female (one of the few C-Levels in Fortune 500). She called me into her office for a “one on one” to ask me how it was like working with him, yet I could tell she was fishing to see if he was treating me like crap. Consequently, they fought like cats and dogs. He gave her no respect (she was HIS boss), and he was on his way out. She showed me that women have thicker skin to deal with this disrespect for her position.

Choose to Beat the Odds

If you believe in karma, their time will come. It’s not up to us to deliver it!

Finally, I don’t put myself in the “women category” every day. This is why women have thicker skin, we take the punches to move on. I focus on my vision, my future, my success and create my own destiny. I don’t let the negative that goes on in this world personally affect me. Most noteworthy, women CHOOSE to beat the odds and are aware of different treatment.

Carrie is the Founder and CEO of BLK24.com, a digital marketing and mobile consulting firm. In addition, she is the co-Founder and COO of One Touch Video Chat & One Touch Law, a mobile video chat technology provider. She has been recognized as one of the top 100 female founders in the US, top 50 mobile leaders in the US, and top 40 marketing executives under 40 in the US. Furthermore, she has been published in many magazines and publications as one of the top market thought leaders in mobile marketing strategies, call centers. and technology innovation. As a result, she has been featured as one of the top entrepreneurs in the country on Marcus Lemonis’s TV show, “The Partner,” on CNBC.