You are here: Home / Reader Submission / Why You’re Overqualified and Not Hired 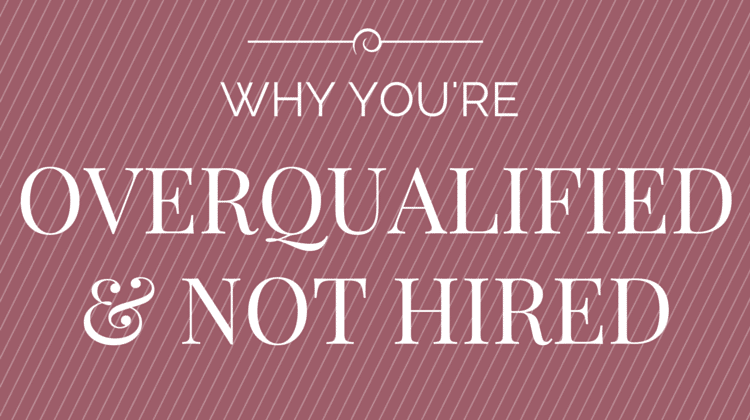 Have you been trying to land a job that matches your qualifications but are not being able to get it? Have you been refining your resumes and cover letters to finally get that interview call for the job that is the perfect fit for your skills but are still getting rejected?

If the answer to these questions is yes then there is a chance that you might be considered overqualified for the job positions you have been applying for.

It’s not that uncommon for hiring managers to label people as overqualified for a job. This tag is hard to remove and more often than not makes you ineligible for a job that suits your personality, skills, and qualifications. However, instead of becoming depressed and thinking that you are never going to find a suitable job according to your qualifications after being labeled as overqualified, it’s best to see why you’ve been branded with this tag in the first place and try to remove it.

following are some of the reasons that can make you overqualified in the eyes of a hiring manager.

The resume and cover letter that you’re sending plays a big part in deciding whether you get branded with the tag of overqualified or not. You might be producing a resume or cover letter that is not even considered by the hiring manager. This is often the case with resumes that are over-stuffed with lists of degrees and skills instead of giving any inkling about yourself and your personality. Such resumes are not even read by hiring managers and even if they do read those resumes, they are highly likely to label them as being from an over-qualified person.

The hallmark of a boring cover letter and resume is that you give importance to your degrees more than your individual self. You might think that mentioning the degree required for the job is enough for landing the job, but actually it tells the hiring managers nothing as they aren’t able to get an idea about whether you’re going to be able to carry out the tasks necessary for the job. Thus, understanding the job description and making a resume that addresses it is necessary if you want the hiring managers to even notice and read it.

Another means of making your resume entertaining and interesting is to ask the human resource managers of the companies that you have applied to before and learn from them what was the reason they picked someone else instead of you. They are going to give you a great deal of insight on what your resume and cover letter lacked.

When hiring managers are looking at resumes and cover letters, what they’re really looking for is a person who can take the company forward. However, since you’re trying desperately to get hired, you mention nothing about your leadership qualities, and therefore, you don’t satisfy the hiring managers.

It’s important that you mention in a clear and precise manner what you’re capable of and what you can do for the company. Stating your leadership qualities is going to help you in telling the company that you are the one with the edge over other applicants and are perfect for the job opening.

Job-seekers are labeled as over-qualified when their degrees and qualification match the job requirement, but their personality traits either clash with the job they will have to perform or are not mentioned in the resume at all. If you want to avoid being tagged as such, it is imperative that you give a good account of your personality in the resume along with a clear view on how you’re going to help the company achieve its goals.

Make sure in your resume, as well as during your interview, to show the hiring managers that you’re not a short-term employee who is going to bail on them if a new offer arrives. Tell them that you’re interested in becoming a long-term asset for the company.

It will become a lot easier for you to remain calm, composed, and confident during the interview if you have done a great amount of research on the company and are aware of its vision, mission statement, and future goals. Do your research and make sure that you’re able to answer questions related to the company as well as the job you’re applying for.

Not Having Anything to Offer besides a Specialized Skill

It’s logical to think that having a specialized skill is enough to land you a job. However, this is not the case anymore. Employers are looking for people who can do a little bit extra than what they’re required to do. A multi-purpose candidate is considered far more appealing for an employer even if she is under-qualified for the job since she can perform many of the things that you don’t. Therefore, if you want to land a job and don’t want to be considered over-qualified, then you have to learn additional skills that makes you more valuable to the company.

A recent study performed regarding what employers are looking for to separate two equally qualified employees revealed some interesting things. For instance, the candidates with a better sense of humor, dressing sense, and a similar personality as the hiring manager were preferred over other candidates. Make sure that you show one or more of these qualities to employers during your interviews and you’re bound to get hired.

If you want to get rid of the overqualified label and earn a job, then you have to keep these tips in mind.

Julie Petersen is a writing advisor, English language teacher, and freelance writer. She earned a Bachelor’s Degree in Arts from Stanford University. You can find her on her website, Ask Petersen.