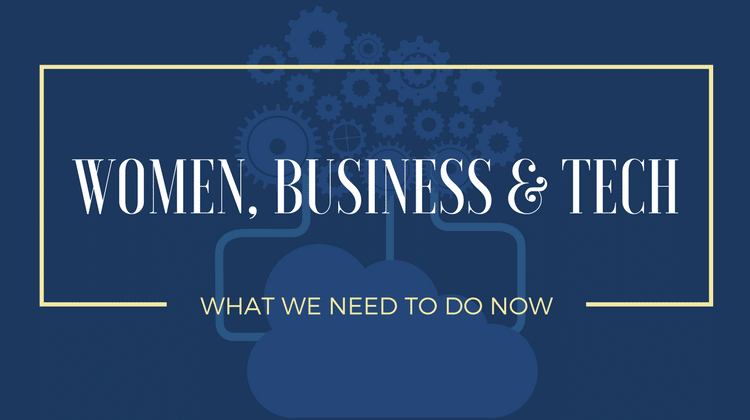 Tech dominates our business lives now; if we don’t master it, we will be at the mercy of those who have – including our competitors. Decades in the tech industry have taught me a few lessons that might be helpful.

I’ve been rubbing elbows with tech guys since I started selling machine shop tools at 17, for a Pratt & Whitney distributor, who proudly told me that I was the first woman to do so, gave me a catalog – and no training whatsoever – and set me off to sell with an “atta girl” pat on the back. “If you do well,” he promised me, grinning, “you’ll make as much as $3,000 a week.” Given that I was facing four years of working my way through college, often holding down three jobs at once while getting my degree, this was the kind of news that had me fantasizing about buying a brand new snappy sports car in a couple of weeks. Ah, youth.

The reality? I failed miserably, of course. I barely made enough commission to pay for the gas required to visit machine shops in the area. The reason for my inadequacy came sharply into focus on the day that one very old and very sharp shop foreman, after quickly ascertaining that I could not tell him why my drill bits were superior to those he was currently using, said to me, “Honey, you can’t sell what you don’t understand.”

Tail firmly between my legs, and in full view of all the machinists who had come out to see what a mini-skirted sales gal was doing in the lobby, I slunk back to my car. But, as my husband will tell you, I am very stubborn. And I had never, to that moment in my young life, been so embarrassed. Before I even reached out to open the driver’s door on my second-hand, light blue Chevrolet, I had made a life-changing decision. From this moment on, I’m going to learn everything I can about technology – and selling. It was a vow, one that I have not broken since.

The first challenge was to get past the much-held perception that a woman can’t learn technology. That was an easy one to overcome; I just ignored it. The second challenge was to figure out how to learn what I needed to learn. There was no Google back then (life without Google – impossible to imagine now!). There were classes, of course; I took a few. There were books; I read voraciously.

But I found, over the years, that I could learn an amazing amount if I simply asked questions. After I got out of college, armed with a degree in music that would do me no commercial good at all (at that time, teaching jobs were in short supply), I decided to capitalize on all the sales jobs I had held and set my sights on pursuing a career in business. After working in a temp agency in San Francisco for a while, interviewing candidates, I ended up as a technical headhunter, recruiting and placing engineers in Silicon Valley. I did this for five years, interviewing thousands of engineers and also visiting the companies where I was going to place them. I thus developed an understanding of how technology was designed and manufactured.

I found that the men I interviewed – during that whole time, I never once met a female engineer – were more than happy to explain technology to me, in great detail. It wasn’t very often that they had the experience of a young woman enraptured by their technical explanations. Even the most taciturn engineers became positively chatty. Of course, it didn’t hurt that I would be more likely to help them land a great job if I understood what they did.

After that, I went back into sales and marketing, working for a number of Silicon Valley companies before starting a marketing firm. I was 28. This was back when the PC had been introduced to the market – and the battle between IBM and Apple – was well underway.

With rare and obvious exceptions, I found most men in the technical arena to be more than happy to help a woman, even back then. I came to see that glass ceilings were often created more by the women who complained about them than the men who were supposedly keeping women down.

Fast forward to now. I am still learning everything I can about technology and selling. As we all know, technology has become so ubiquitous that our smartphones are an extension of our very existence; we cannot imagine life without them. And just slightly less than 50% of our workforce are women now.

What We Need to Learn Now

But women, even though we are dedicated users of technology, and those of us who run companies are completely dependent on technology, are still behind the curve when it comes to understanding how technology works.

I’m not talking about the guts of a computer or smartphone. While I was fascinated about the “hardware” side of technology, personally witnessing printed circuit boards, over time, being shrunk into tiny chips that we now take for granted, it is software that now dominates our existence. Particularly software running on the cloud. We are living in the age of cloud-based apps.

If we don’t figure out how to master those apps – and understand the web- and cloud-dominated environment on which they run – we are at the mercy of technical experts (male or female!) who hold our careers and businesses hostage simply because they know more than we do.

I can’t tell you how many times I have seen a company owner or manager being held hostage to a particular developer and/or platform, unable to make changes quickly and inexpensively, and yet also unable to move away from that developer/platform without a major (and possibly fatal) disruption. This is a serious, all-too-common problem that plagues our economy.

It takes a single-minded determination to learn the backend of technology. Given the busy-ness of our working lives, it’s tough to carve out the time needed to comb through the information now available to us all. Learning the technology by itself is not necessarily what is required though. The goal is to understand what you can do with it and what it cannot be made to do.

You also have to ask a lot of questions, never being dissuaded by someone saying, “You don’t need to understand this,” and digging until you really do get it.

Increasingly, all of us business users are trying to help each other understand what is going to happen to us after we buy a particular piece of software, thanks to sites that enable software buyers to share their experiences. There are also some bloggers who do this well, weighing the pros and cons.

Unfortunately, your situation is going to be unique, so even this user-centric information is only going to get you so far in your evaluation process. You will definitely have to list and prioritize the criteria that are important to you, so you can weigh trade-offs. No application will meet your needs exactly.

And no matter how much research you do ahead of time, you won’t be able to avoid all of the unforeseen gotchas. But you can definitely minimize them if you decide you will understand what you can and cannot do with a particular app or platform and do not depend on people with an agenda (such as a developer who only works with one or two platforms) to help you make your decision. You can and should also include the creation of a prototype in your selection process; there is no substitute for putting the software to the test with sample data. You’ll see things you wouldn’t see otherwise.

Software is now the most important non-human contribution to our business success, and we have to master it if we are going to thrive.

Kristin Zhivago is the president of Zhivago Partners, a digital marketing management company. She is the author of the five-star book, Roadmap to Revenue: How to Sell the Way Your Customers Want to Buy, and speaks frequently on marketing to today’s tech-savvy customers.