You are here: Home / Equality / Video Evidence of the Gender Chasm in Business and Politics

The gender gap looks more like a chasm in business and politics today — surprising in 2012. Today, I’m going to share some video evidence of that gender chasm.

While this is not a political website and I try to keep the content as non-partisan as possible, the video evidence below is included, not because it attacks Republicans, but rather because it sheds light on issues that should not be political at all — yet they’re topics greatly debated among men at the highest levels of government in the United States.

First, a video from Funny or Die that uses humor to call attention to just how big the gender gap is in the U.S. Congress.

Unfortunately, the gender chasm in business is just as big. As a result, not only do women get paid less than men and receive fewer executive and board positions, but they also get products and advertising that are created by men. Research has shown again and again that women make or influence over 70% of purchase decisions, but for some reason, companies continue to churn out products and ads that are irrelevant, condescending, or offensive to women.

The next piece of video evidence comes from maxipad brand Bodyform was created in response to a comment made by a man on the brand’s Facebook Page. That comment is shown below. 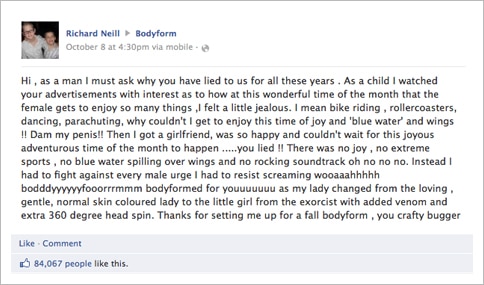 The humorous video response makes it clear that maxipad commercials are not made for women despite the fact that women are the audience who purchases and uses them. The evidence of the gender chasm in business cannot be denied.

You can find these types of examples everywhere, but the gender chasm in business and politics shows no signs of closing until the gender makeup of political and business leadership becomes equal (or at least closer to being equal). Amanda Fox of Spicie wrote a great article that discusses this subject and more called You Want a Strong Economy? Strong Women Will Deliver It! (If You Let Them). It’s well worth the read!

What do you think? Is the gender chasm in business and politics going to close in our lifetimes? In our daughters’ lifetimes?